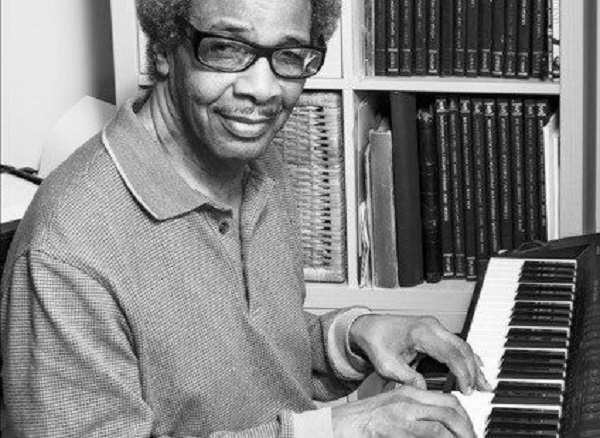 Three years on and off the road with Benson took a toll on Covington, and the rigors of family life required his presence at home. He earned a solid living working with many bands. He toured in Europe and China with various groups. When asked why he never signed a record contract, his response was simple and direct: “I wanted to control my music.”

His renown and expertise as a jazz pianist and organist garnered the attention of the Peabody Conservatory of Music who, after his early experience there, hired him to teach jazz piano. His tenure there lasted twenty years. He also added to his resume a twelve-year stint as a professor of piano at Howard University. As jazz pianist in residence at the Kennedy Center, Covington performs there annually. Charles Covington, pianist, organist, chess master, mathematician, magician, gentle genius.

In-person attendees receive a link to the recording to view for one week.
Ticket sales end 1 hr before showtime; tickets can be purchased at the door if any remain.

Streaming  Cost is $15
The link will be revealed to live stream participants 15 minutes before the show
and will remain active through Aug. 12

Following a stint in the army, Covington returned to Baltimore determined to learn music and play jazz. He enrolled at the Peabody Conservatory, taking the only class offered in jazz. Ironically, he was not allowed to attend classes. He took his instruction in this teacher’s home because people of color were not welcomed at Peabody at that time. Undaunted, Covington taught himself piano and organ at the Hammond Music School in Baltimore, spending 50 cents an hour to learn in their practice rooms.

Covington's real music education came from his haunting of the famed downtown Baltimore clubs that provided him opportunities to hear a myriad of musicians and styles. While his skills were in their infancy, he apprenticed himself to a local singer named Peaches who took a liking to him and took him under her wing. Peaches exposed the neophyte, who never drank or smoked, to Baltimore’s club world. His challenge was to learn and play from her personal songbook.

Under Peaches’ mentorship, Covington got to know all the musicians “on the block,” memorizing 12 to 15 songs daily so he could play anything. Experiencing disparate treatment from a musician’s union that favored whites, he and other musicians of color were required “not to stand out” during the breaks in the clubs where they played.

As Covington’s fame grew, he studied Fats Waller, Ray Charles, Wild Bill Davis and Jimmy Smith. He perfected his use of the sustain pedal on the B-3. Musicians spread the word about this young “cat” who could play anything. Earning “steady money” and developing a loyal following, Covington became an opening act at the Royal Theater in Baltimore. His big break came when a local drummer invited him to play in New York. In the audience was George Benson’s manager, who after hearing him play invited him to tour and play with Benson. Ironically, while the money was good, there were times when things were slow and “tight” on the road. With a growing family in Baltimore, Covington took up chess in an effort to make ends meet. He hautned New York chess clubs where he “hustled” chess. True to form, Covington was obsessed with chess and became one of the top ten black chess players in America. He still enjoys “Life Master” status granted by the United States Chess Federation.