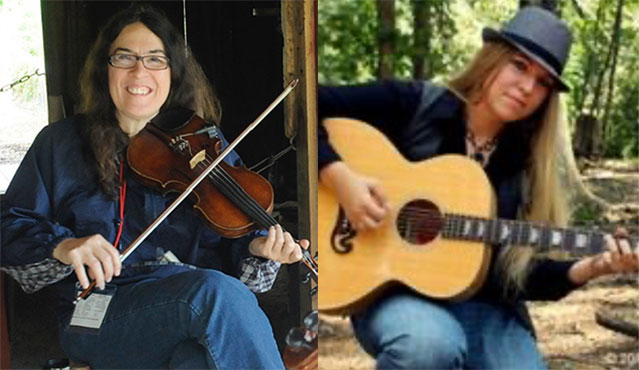 Kipyn Martin is an emerging Americana singer-songwriter whose roots sink deep into the banks of the Shenandoah River. Accolades forKipyn include being honored by the Washington Area Music Association with their WAMMIE Award for New Artist of the Year and multiple Gold Awards in the Mid-Atlantic Song Contest. Kipyn also tours the country with Allison Shapira in the duo show Joan & Joni, a tribute to the music of Joan Baezand Joni Mitchell (info @ www.joanandjoni.com). Kipyn’s 2020 calendar includes shows with her band The Sunshiners, to benefit Music for the Planet (details at www.kipynmartin.com/musicfortheplanet), solo touring in the Chicago area (March) and co-bill shows with Siobhan O’Brien in the Southeast (September).

New Orleans-based Gina Forsyth is an award-winning singer/songwriter, who is known for her wizardry on fiddle and guitar. With an alto as unique as it is soulful, unpretentious songs that cut straight to the heart, and a wicked sense of humor, her live performances are legend. Considered one of the best Cajun fiddlers in Louisiana (no small feat), Gina is in demand from other great Louisiana musicians to play club gigs and festivals, some of the same talent that backs her up when she plays as Gina Forsyth and Friends. Rheta GrimsleyJohnson of Daily Journal probably sums up Gina best:

“If you’ve ever wondered what happened to the gutsy folk singers who used to roam the earth with their instrument and protest, check out Gina Forsyth. In the tradition of Guthrie, Dylan and Prineshe is writing and singing, not just fiddling while America burns.”