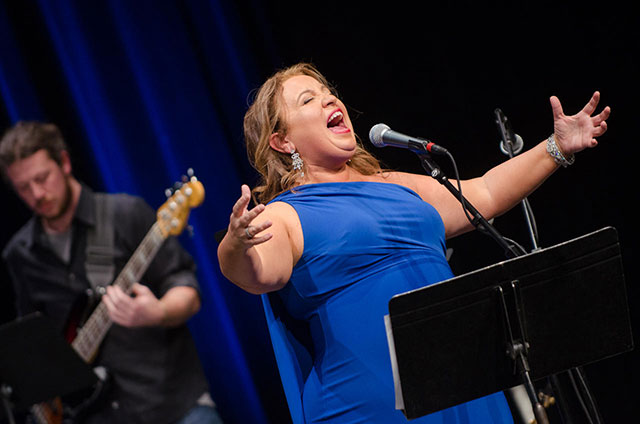 “When she sings, I feel close to God!”
These words have been used to describe listening to Meredith. Her voice touches the hearts of many. Meredith is the Director of Music at the Church of St. Francis of Assisi in Midtown Manhattan, New York City.  A native of Morgantown, West Virginia, currently residing in Brooklyn, New York, she holds a Master of Science degree in Rehabilitation Counseling from West Virginia University.
Meredith started singing at an early age, and her styles run the gamut from jazz to musical theatre, from spiritual to soul. She has worked in ministry since the age of nine as a cantor, accompanist and choir director for churches. She has also done extensive work in jazz clubs in the northeast.
Meredith’s first self-produced CD, “What’s Goin’ On!” received rave reviews. Her association with the liturgical music publisher WLP began in 1995. Meredith has performed with some of the best-known songwriters and musicians in the Catholic music industry. The list includes Tony Alonso, John Angotti, Ed Bolduc, Jaime Cortez, Gary Daigle, Bobby Fisher, Sarah Hart, Tom Kendzia, Jessie Manibusan, Danielle Rose, and many others. She is a featured soloist on most of John Angotti’s recordings. Meredith can also be heard on Paul Tate’s recording “Rejoice!” as well as Tom Kendzia’s recording “Endless is Your Love.” Meredith had the pleasure of working with the late Leon Roberts on his final recording “Come Bless the Lord.” Meredith’s three fine solo albums with WLP are “Come and Go With Me”, “Deep River”, and “Boundless Mercy.”