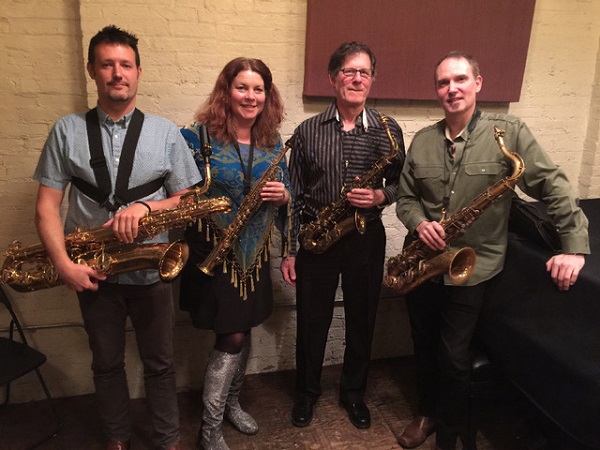 Out of Quarantine is a selection of pieces composed and arranged by Charley Gerard and Jenny Hill during the pandemic. Those Who Were, made up of pieces dedicated to Mr. Gerard’s parents, was commissioned by Chamber Music America with the generous support of the Doris Duke Foundation.

Charley Gerard is a composer, saxophonist, author and publisher in New York City. Mr. Gerard studied composition and saxophone with Jimmy Giuffre, conducting with Harold Farbermanand David Leibowitz, and holds a graduate degree in ethnomusicology from Columbia University. Mr. Gerard founded the Broken Reed Saxophone Quartet In 2002. He draws inspiration from politics, film, as well as historical whimsy, enabling the quartet to transport their audience across time and space, from Mozart to New Orleans to Cuba, to the pages of poetry and popular culture. The group is as linked by its sense of humor as it is by its unique sound.

Mr. Gerard created the Weary Blues Project using the poetry of Langston Hughes and featuring Washington, DC poet Holly Bass. In 2011 the Embassy of the Czech Republic and Washington Musica Viva commissioned him to write Dvorak Jazz Dancesand to arrange the music of Jaroslav Jezekfor jazz sextet the following year. Washington Musica Viva commissioned Mr. Gerard to compose Bukowski Liked Mozart(based on the Mozart Sonata No.9 in F, K. 377) which was broadcast live by Takoma City TV. Another highlight of this period was a series of concerts called Jewish Cabaret Project with arrangements of Kurt Weill and other Weimar-era cabaret composers.

Mr. Gerard's music has been published by Really Good Music, Harteluand Dorn. He is the author of Salsa: The Rhythm of Latin Music (White Cliffs Media), Jazz in Black and White: Race, Culture and Identity in the Jazz Community (Praeger), Music from Cuba: Mongo Santamaria, Chocolate Armenteros, and Other Stateside Cuban Musicians(Praeger), Jazz Riffs for Treble Instruments(Music Sales Company), Sonny Rollins(Music Sales Company), and Improvising Jazz Sax(Music Sales Company). Mr. Gerard also had a career as an editor with Gerard and Sarzin Publishing Co. which he started along with Evan Sarzin, which published books for jazz musicians and students.

Streaming cost is $10
Donations are welcomed.
The link will be revealed to you 15 minutes before the show
and will remain active through Aug. 8