Fri, January 28
7PM / $15 We regret that this performance is being postponed.
An die Musik Live! 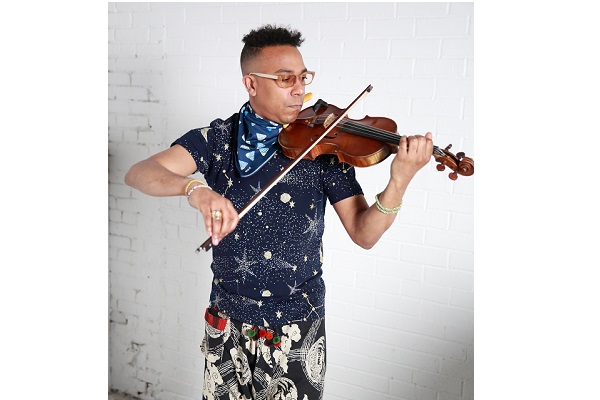 Program
Don’t Let the World Pass You By (J.L. Ponty)
I Have a Dream (H. Hancock)
Black American Matter (M. Khaliq)
Power to the People (J.Henderson)
Someday We'll All Be Free (D. Hathaway)

Celebrating Martin Luther King Day with compositions written to commemorate the many triumphs and challenges Black people have experienced during their struggle for freedom in America.

Ma*Jid is a comtemporary jazz ensemble comprised of rhythm section, strings and brass. The band has been described by legendary musician Wynton Marsalis as having “a unique blend of improvisation, groove and technical sophistication.” Ma*Jid possesses all of the significant parts of the symphony orchestra, thus allowing the music to move freely in and out of the various musical influences.

Majid Khaliq is a violinist and composer cut from a different cloth. He has been described by legendary musician Wynton Marsalis as having “a unique blend of improvisation, groove and technical sophistication.” Although classically trained, Mr. Khaliq’s passion and musical palette ranges from the roots of American jazz music to the greats of the Progressive jazz scene. He is quickly establishing himself as a rising talent in the world of jazz. As a young boy growing up in the New York area, Mr. Khaliq demonstrated a serious interest in the recordings of Duke Ellington featuring Ray Nance on violin that he heard his father playing at home. At the age of five, his mother enrolled him in violin lessons. From that point on, music has provided Mr. Khaliq with the opportunity to play in some of the world’s most acclaimed educational institutions and concert halls. In 2002, Mr. Khaliq graduated from the Juilliard School with a Bachelor of Music and in 2010 with a Master of Arts in Jazz Performance from Queens College’s Aaron Copland School of Music. Mr. Khaliq has played with great musicians such as Wynton Marsalis, Kenny Barron, Antonio Hart, John Blake jr., Itzahk Perlman, Isaac Stern, Mark O’Connor and Regina Carter. He has performed in numerous famed venues including Carnegie Hall, Avery Fisher Hall, Alice Tully Hall, the Kennedy Center Concert Hall in Washington, D.C., and Dizzy’s Club Coca-Cola at Jazz at Lincoln Center.

Limited in-person seating: $25
Proof of COVID-19 vaccination is required at door.
Audience members receive a link to the recorded performance to enjoy for one week after the show.

7PM / $15 We regret that this performance is being postponed.