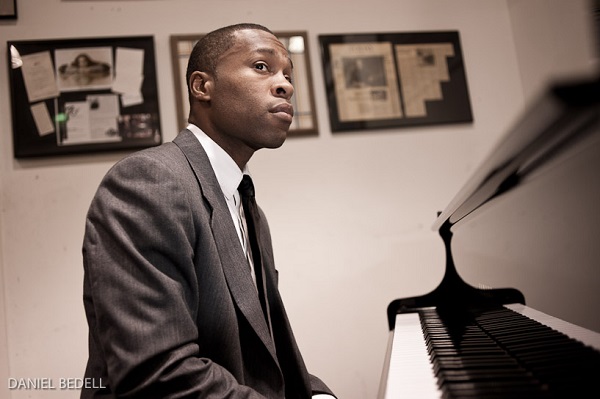 A bi-monthly series to promote and focus on the innovation of
The jazz piano, featuring local and national artists.

Born in Pittsburgh, home to jazz greats Art Blakey, Ray Brown, Jeff "Tain" Watts and Ahmad Jamal, Richard D. Johnson has strong territorial jazz roots. He was first introduced to the piano at the age of five by his father, a gospel pianist from Baltimore. Since then, he has cultivated a rich and pedigreed musical background being schooled by some of the most legendary jazz musicians and studying at the most esteemed institutions of music. After receiving a scholarship and graduating from the Berklee School of Music in just two years, Richard entered the Boston Conservatory where he earned a Master’s degree in Jazz Pedagogy. He then went on to receive an Artist Performance Diploma at the Thelonious Monk Institute of Jazz Performance at New England Conservatory under the direction of the influential Ron Carter.

Richard was invited to become a member of Wynton Marsalis' Septet and the Jazz at Lincoln Center Orchestra, which he did from 2000-2003. He also played as part of the Russell Malone Quartet, Delfeayo Marsalis Quintet & The Bobby Watson Quartet. After completing his tenure with those groups Richard started the Reach Afar program for young people ages of 7-17, educating them about elements of jazz in hip-hop.

Richard has traveled extensively, sharing the gift of jazz to audiences around the world. As a representative of the United States through the U.S. State Department, Richard was named United States Musical Ambassador. During that time he did six state department tours that took him to Central and South America, Africa, & The Middle East affording him the opportunity to perform in more than 76 countries. Richard has also accompanied such jazz icons as Wayne Shorter, Herbie Hancock and Arturo Sandoval.

In 2005 Richard became the musical director for the Atlanta Spirit LLC. This joint project enabled him to create a live instrumental five member band for the N.B.A and perform at all fourty-six home games and outside activities. One of Richards other strengths is administration and music management. In 2013 he began his artist in residence at Eau Claire University in Wisconsin. After a 2 year stint there he relocated to Chicago.

Currently Richard is the founding member of “Johnson works LLC” a management placement service for musicians. In his current role he performs with world-class artist promoting jazz to a vast array of audiences. Also Richard is the leading Jazz Piano instructor at Peabody Conservatory of John Hopkins University in Baltimore, MD. Richard also serves as the piano instructor for the Ravinia Jazz Program located in Chicago.

Richard is an accomplished composer and arranger with four musical releases as a leader. His latest co- lead project with Gregory Generet, entitled 2 of A Kind, features a stellar cast jazz ensemble consisting of Freddie Hendrix on trumpet, Jon Beshay on tenor saxophone, Barry Stephenson on Bass, & Henry Conerway on drums. Richard is a Yamaha endorsed piano artist!