After the War Comes the Dishes 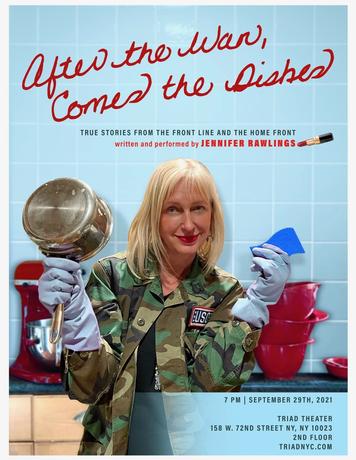 Jennifer Rawlings is an award-winning performer, writer, and filmmaker.
Jennifer is one funny mother of five.  She has been traveling to war zones for 20 years to entertain the troops.
In her brand-new solo show, "After the War Comes the Dishes," she weaves together stories of motherhood, marriage and war.
This 75 minute show will take you on a rollercoaster of laughter and tears.
You may have seen Jennifer on COMEDY CENTRAL, CMT, PBS, VH-1, A&E, CNN, HLN, CURRENT, JOY BEHAR, the film “I Am Battle Comic,” or streamed one of her two TEDx talks.  Jennifer's first solo show, "I Only Smoke in War Zones," has toured the globe including the prestigious “Humor for Peace Festival”, and Carnegie Hall's "Voices of Hope"
Jennifer is a beloved key-note speaker at events across around the globe and is known for her wit and inspiration. Using her humor as a way to tackle serious subject matters got her named as one of the “21 Change makers of the 21st Century” by Women’s E News.
For decades Jennifer has left her family to entertain the troops. She has performed in over 350 military shows in dozens of countries including Iraq, Afghanistan, Haiti, Bosnia, Kosovo, Macedonia, Djibouti, and Bahrain.
It was during these trips to war zones that Jennifer added the title documentary filmmaker to her list of jobs. Jennifer’s powerful directorial debut: “Forgotten Voices: Women in Bosnia” has received critical acclaim and has been invited to screen at film festivals worldwide. Several universities including Harvard and UCLA have included “Forgotten Voices: Women in Bosnia” as part of their curriculum.
Traveling to war zones and directing “Forgotten Voices” prompted her to write the hilarious and haunting solo shows “I Only Smoke in War Zones”  and "After the War Come the Dishes". "I Only Smoke in War Zones" has toured around the globe, including New York City, Columbus, London, Belfast, Luxembourg, St.Louis, and Washington D.C, just to name a few. In every locale audiences laugh, cry, and feel inspired.
Rawlings has written numerous essays and magazine articles for national publications including The New York Times, Change.org, The Wall Street Journal, Reader’s Digest, and Hybrid Mom. She has written television specials and after-dinner speeches for prominent world leaders.
In addition to cooking, cleaning, playing her accordion, and touring, she is currently finishing a new book.

"I love Jennifer's show because it's a sad yet funny, ugly yet beautiful story about humanity and inhumanity!" - Colin Quinn, star of stage and screen

"We were truly impressed, especially by Jennifer's ability to make us laugh out loud, and a few seconds later, to bring us to tears. It was a very moving and memorable experience. We are now officially big fans and wanna be groupies!" - Various audience members