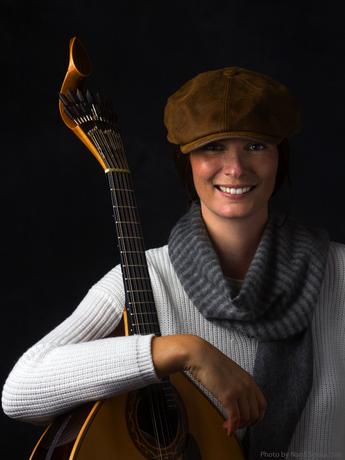 Historically, the Portuguese guitar has always been associated with a man as a musician and is mostly limited to Fado as a language. Guitarist Marta Pereira da Costa breaks with these traditions and prejudices, and presents the Portuguese guitar in the feminine, as the main voice of an instrumental project. Marta Pereira da Costa gives shape to a new project, bringing together her two instruments of choice: Portuguese Guitar & Piano. Marta challenged pianist Alexandre Diniz and together they prepared an exclusive concert, which brings the two instruments together in a real musical journey. Very accustomed to playing side by side, and with complementary influences and tastes, the two instrumentalists decided to create new arrangements for the existing repertoire, covering the most varied sounds, from Portuguese traditional music, fado and jazz, to world music. The two musicians also prepared some innovations to unveil on stage. The result is an intimate and vibrant concert, to the elegant sound of Marta Pereira da Costa’s Portuguese Guitar and the jazzy sound of Alexandre Diniz’s Piano.

Marta Pereira da Costa is the world’s first and only female professional Portuguese guitarist of fado music, the soulful sound of Portugal recently acknowledged by UNESCO as part of the World’s Intangible Cultural Heritage.

Marta has performed with Mariza, Camané, Carlos do Carmo, Mário Pacheco, before pursuing a solo career and touring globally to sell-out concerts not only in Portugal, but France, Italy, Brazil, Israel, Romania, Dubai (Expo 2022) and Spain .

Her first U.S. tour was in 2019, when she debuted at SXSW, the Kennedy Center’s Millennium Stage, and Lincoln Center’s Atrium, touring from New York to California. Later on 2021 Marta returned for concerts at Joe's Pub (NYC), APAP (NYC), Crocker Museum and Gallo Center in California. This year participated at New York Guitar Festival at Greene Space. Marta will come back on fall for National Gallery of Arts, Blues Alley and 3 more concerts on the west coast.

9PM / $20 Get Tickets
*Please note:
1. Final sale, no refunds, not transferable.
2. $15 food/beverage minimum per person not included in ticket price.
3. Seating first come at the door. Doors open 6 PM & 8:45 PM respectively.
4. Photography or Recording of any kind is prohibited during the performance.
5. Keep conversation to a minimum during the performance.