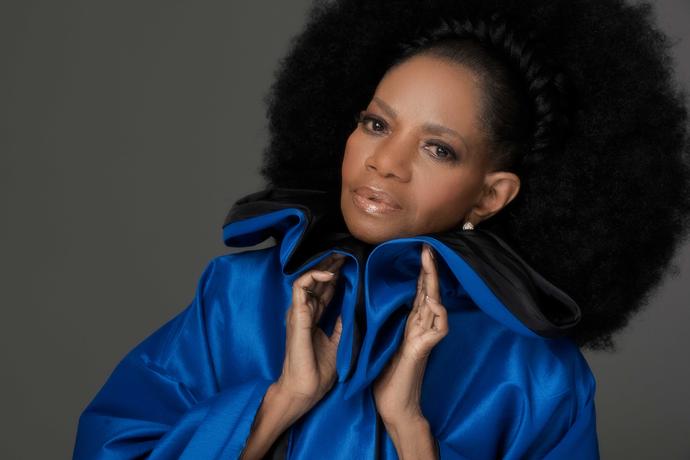 Celebrating nearly five decades of performing and recording, Melba Moore radiates passion for what she does and appears as energetic and engaged with her craft now as nearly 45-years ago.

Legendary Melba Moore is back with the smooth sound of soul music that strikes the perfect balance between traditional R&B and contemporary stylings and listeners from different generations are taking notice.

The Tony Award winning and multi-Grammy nominee’s single, So In Love, spent 3 weeks at # 1 on the UK Soul Top 30 Chart in November 2021 and made traction in the United States.

The making of So In Love, written by Chantel Hampton and Rahni Song, was a labor of love for Melba and her daughter, Charli Huggins.

“It was first brought to me by my daughter and her uncle, (music producer) Beau Huggins,” Melba says. “Charli has grown up in the industry. She has diverse interests but one thing that I know for sure is, she has a genuine love and knowledge of music. So, we thought why don’t we do a project together?”

So In Love is from Melba’s forthcoming album Imagine, which is slated for release on Charli’s independent record label, The Gallery Entertainment, in April 2022. The project came at the right time for the mother/daughter collaboration.

“I’ve worked with a few record companies in the past, (and) in its own organic way, the project ended up becoming what she and I wanted to do years ago, “Charli says. “There were several songs my uncle, Beau Huggins (the album’s executive producer), (received from songwriters/producers) and he kept saying, ‘I can hear your mom on this.’ Beau (who executive produced Melba's albums in the 1980s) always knew my mother’s voice. In my opinion, her best work has been done with my uncle. So, I approached my mom about recording the songs and we all got together and put them down.”

Charli continues, “Over the years, my mom has put out a lot of dance records and we thought what we were doing was fresh and bringing her back to her R&B roots. Essentially, my family came together to help me bring my vision to reality and we have achieved that and so much more.”

The album and title track, with lyrics by Chantel Hampton, sets the tone for the entire project.

“The song is about really having paradise on earth,” Melba says. “(What) if everybody can live in peace? What if there was no more war? It's written so beautifully that collectively we thought regardless of what the rest of the album is, this should be what our theme is, and what we want people to focus on.”

In addition to co-writing So In Love, Rahni Song and Chantel Hampton also co-wrote Take Me Way, which will be the next single from the album. Melba and her team also brought on writers/producers Janice Dempsey and Danny Pickering, who both co-wrote four tracks - Since I Took My Heart Back, Take Her Picture Down, Joy and Pain, and Forever.

Melba’s songwriting/producing team is a nod to her chart-topping days of the 1970s and 1980s. However, the actress/singer wants her seasoned fans and newer listeners to know that she has evolved.

“I have lots of younger people bringing me new music,” Melba says. “So, I'm making changes. I’m going to give you (my) history, but I'm not going to insist that you just stay in my bubble.”

Melba Moore is living her best life by doing what she loves most - working with family, recording music, and sharing her joy and strength by giving back to the community.

10PM / $42.50 Get Tickets
*Please note:
1. Final sale, no refunds, not transferable.
2. $15 food/beverage minimum per person not included in ticket price.
3. Seating first come at the door. Doors open 6 PM & 9:45 PM respectively.
4. Photography or Recording of any kind is prohibited during the performance.
5. Keep conversation to a minimum during the performance.