Melissa Fenton: All We Have Is Now 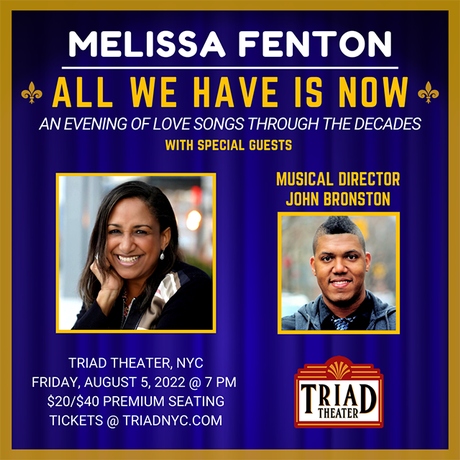 Join us for "Melissa Fenton: All We Have Is Now" with Musical Director, John Bronston and Special Guests, for an evening of love songs through the decades.

Our show, "All We Have is Now" is about the lesson that we have learned from this pandemic, underscoring that we have a limited time on this earth to live, pursue our passions, and to love the people we cherish.

Melissa Fenton has performed a variety of musical genres from rock with her band, "Six 2 Midnight,"  acapella with "The Belles Curves," to broadway classics for charitable fundraisers across venues in NYC and Chicago. Her passion for championing diversity, equity and inclusion and long-standing work with members of the Broadway community, drives this project.

Melissa is thrilled to be performing with John Bronston again. Through their collaboration at City Lights Youth Theatre and beyond, they have impacted thousands of youth in NYC with the performing arts.

John Bronston is currently the Black Theatre Coalition Music Direction Fellow at "Tina The Musical" serving as a member of the music team and as rehearsal pianist; and Producer and musical director of the "Creating In Color" concert series. Previously, he served as the musical director of the North American Tour of "Hair" as well as working as an Associate Musical Director on tours of "Ain't Misbehavin," "Smokey Joe's Cafe," and "Five Guys Named Moe." Film credits include "Jasper In Deadland" (Live Stream) for Broadway On Demand and "Don’t Stay Safe," a Drama Desk nominated musical film produced by Prospect Theatre Company. He is a founding administrator of "tutti," an organization devoted to racially diversifying Broadway orchestras, and a member of Local 802 AFM.

Please Note: The Triad has a 2-beverage minimum per person.