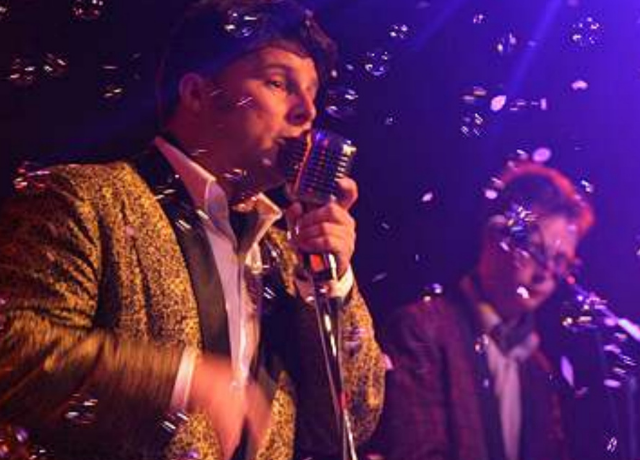 In the fall of 2002, two musicians of vastly different backgrounds were hired to perform a weekly gig together in the lounge of the Indianapolis Downtown Marriott. One was Michael Wiltrout, formerly the singer of midwestern punk/ska heroes of the 90's Johnny Socko. The other was Sean Baker, talented pianist, jingle writer and leader of Indianapolis' premier vocal jazz/lounge outfit, Four Sexes. They were hired to play some pleasant, if neutered, background music for jet-lagged business travellers to get buzzed to. Maybe some jazz standards along with some mid-to-low tempo hits of the day. A good way to make a little money on a Thursday night without breaking a sweat.

Neither one could have had any idea of what would grow out of those initial low-key performances. When, just to amuse themselves more than anything else, they started playing loungy rave-ups of some heavy metal favorites of their youth (Iron Maiden, Van Halen, Black Sabbath, etc.), it quickly became evident that the pairing of these two talents - musically, humorously, and showmanship-wise - was fast gelling into something amazing. Orange and blue and brown tuxedoes were purchased. So was a bubble machine and a fog machine. Fire-breathing lessons followed. Casiotone keyboards, dormant since the 80's, were dusted off. When people started to look at them funny, they knew that, while their days at the Marriott were numbered, their days as magnificent Kings of Leisure were only beginning.

Today, a Leisure Kings show is much like a ride at an amusement park. The music, the humor, the special effects and all the other elements combine to create a show unlike any on the circuit today. Audiences will be amazed that two men can produce that much off-kilter goofiness on one stage. No one leaves a Leisure Kings show unchanged.