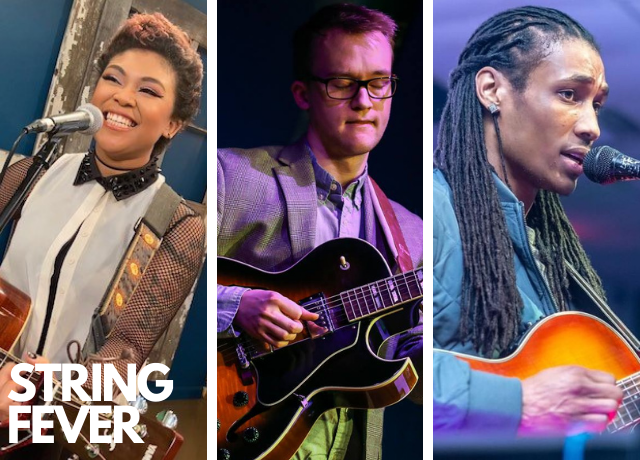 Marrialle Sellars has a unique and powerful sound that fills the room with warmth and passion. 25 years old, born and raised in Indianapolis, IN, has been performing since she was 12 years old. Former American Idol Season 13 contestant, finishing in the Top 20! Winner of the 2012 Carmel Fest in Carmel, IN.
She has recently finished and published an original album called Naked Acoustic EP on Spotify and Original Music Video on YouTube! She has many other projects to come! Now married and raising 2 beautiful boys, she still finds time to do what she loves, making a bright future for her family and herself through music!

Patrick Wright is an Indianapolis based jazz guitarist and educator. Since graduating Butler University in 2015, he has found steady work as an in demand guitarist in the Indianapolis music scene. His versatile playing style pays tribute to his vast array of influences ranging from straight ahead jazz, fusion, rock, and R&B. Patrick has performed with notable artists like Christian McBride, Donny McCaslin, and Bobby Sanabria.

Yadin Kol is a captivating performing and recording artist who's a self-taught guitarist, singer, and songwriter. As a passionate and soulful performer he takes listeners on a musical journey where love and faith balance the ills and injustices of society. Yadin's records provide a combination of his sensational guitar playing, and raw mellow vocals. His sound has a rhythmic undercurrent which bears testament to his retro-leaning, neo-soul style, and his conscious-stirring lyrics come from his southern roots and urban life experiences. Yadin's unrelenting hope for the disenfranchised, and faith in creation are recurring themes in his music. His influences include blues, soul, RnB, reggae, and hip-hop. One of his greatest aspirations is that his music will heal, uplift, and unite people in peace, light, and love. Yadin's debut EP, set to be released in 2021, promises to be a fresh and powerful contribution to the world of music.