Frank Vignola and Vinnie Raniolo return to The Mainstay 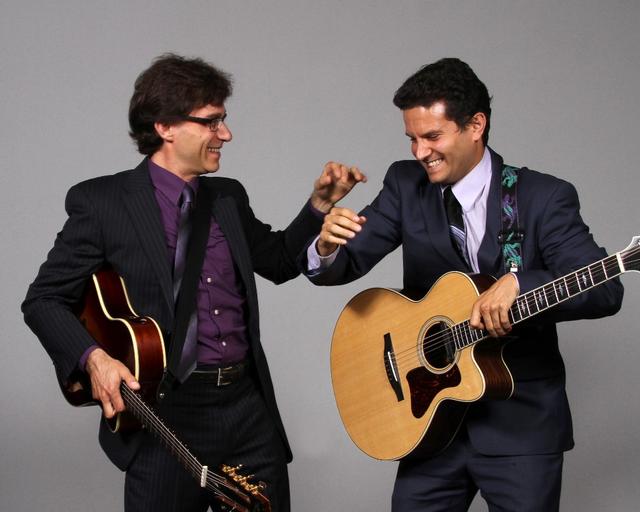 Frank Vignola is one of the most extraordinary guitarists performing before the public today. His stunning virtuosity has made him the guitarist of choice for many of the world’s top musicians, including Ringo Starr, Madonna, Donald Fagen, Wynton Marsalis, Tommy Emmanuel, the Boston Pops, the New York Pops, and guitar legend Les Paul, who named Vignola to his “Five Most Admired Guitar List” for the Wall Street Journal. Vignola’s jaw-dropping technique explains why the New York Times deemed him “one of the brightest…stars of the guitar”.

Born on suburban Long Island on December 30, 1965, Vignola was raised in the New York area. The Italian-American started playing the guitar at the age of six and grew up admiring a variety of guitarists. Far from a jazz snob, Vignola never listened to jazz exclusively and was also a major fan of classical, rock, R&B, and pop. The guitarists that he admires range from Django and Les Paul to rock icons like Frank Zappa and Eddie Van Halen. As a young adult, Vignola studied at the Cultural Arts Center of Long Island and went on to enjoy an enormous amount of sideman gigs in the 1980s including recording and touring with the likes of Madonna, Leon Redbone, Ringo Starr as well as coming into his own as a leader in 1988 with his famed Hot Club of France tribute which was hailed in the NY Times as one of the top ten acts in New York City in 1988 and forged the way for the many Django Hot Club groups that followed.

The New Yorker was 27 when, in 1993, he signed with Concord Jazz and recorded his first Concord session as a leader, Appel Direct. Many more Concord releases followed in the 1990s as well as 3 releases for the Telarc label as co-leader of the group Travelin’ Light. The early 2000′s found Vignola recording a solo guitar CD for Acoustic Disc as well as performing regularly with guitarist, Les Paul. This also marked the time that Frank began working with record producer Joel Dorn as well as making featured appearances on Atlantic, Sony and Warner Brothers Records with the likes of Donald Fagen, Queen Latifah, Mark O Connor and Wynton Marsalis. He also recorded a collection of Gershwin pieces for Mel Bay Records titled, “Vignola Plays Gershwin” which was number 2 in NPR radio airplay charts. In recent years, Vignola has recorded two important collaborative CD’s, “Just Between Frets” with Tommy Emmanuel on Solid Air Records and “Frank-N-Dawg, Melody Monsters” with mandolinist David Grisman on Acoustic Disc Records.

Still in his 20s, Raniolo has already performed alongside Tommy Emmanuel, Tony Trishka, Bucky Pizzarelli and David Grisman. Vignola and Raniolo have been touring together as a guitar duo for nearly four years, and have played hundreds of shows together.