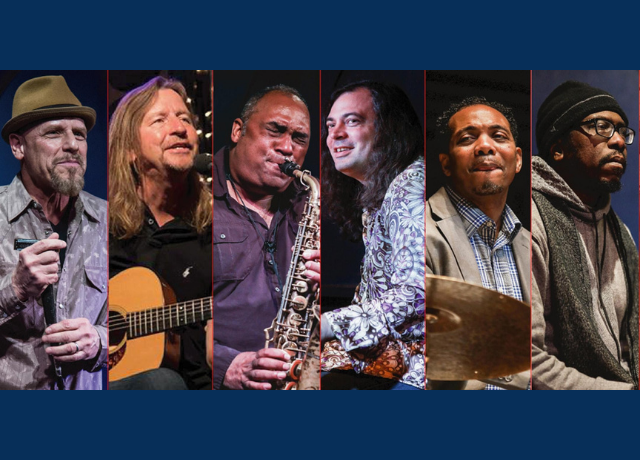 The Jazz Kitchen presents The Blue Side featuring some of the finest treasures of the Indianapolis music scene. Internationally acclaimed singers Gordon Bonham (also on guitar), and Tad Robinson (also on harmonica) front a band of world renowned musicians.

Gordon Bonham has been an integral part of the Indiana blues scene for the last couple of decades. With experiences ranging from backing Chicago blues legends in Chicago as a guitarist, to establishing himself on the Austin, TX music scene, to touring Europe, to being the backbone and the heart and soul of the Indy blues scene by establishing his presence, either through his many recordings, his performances as a solo artists, or by backing blues legends Pinetop Perkins, Robert Lockwood, Jr., Matt “Guitar” Murphy, Jimmy Walker, Bo Diddley, and the transplant Indy blues giant Yank Rachell (a man whose legend runs back to the 1920’s, a man whose influence on blues and rock music simply cannot be understated), Gordon is the essence of 21st century Indianapolis blues. His records are a continuation of the deep Indianapolis music scene, which includes blues legends like Yank, Scrapper Blackwell, Leroy Carr, and Guitar Pete Franklin.

Tad Robinson is the modern voice of soul blues. From his Manhattan roots and his Indiana and Chicago musical upbringing, Tad has caught the attention of the world with his seven Blues Music Award nominations (the Grammys of blues music) and his many recordings, including the song “Rained All Night” which was nominated for Blues Song of the Year at the 2011 Blues Music Awards. He’s a veteran of countless national and international tours, including many of the most important international blues festivals. With harmonica chops schooled by Big and Little Walter, Sonny Boy I and II, Junior Wells, James Cotton, among many, and vocals that compare to Otis Redding, Syl Johnson, Al Green, Teddy Pendergrass, Tad ranks as one of the most unique and talented members of the international blues and soul communities.