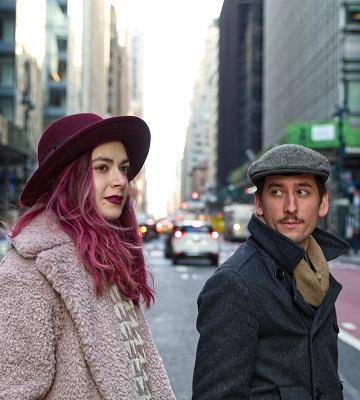 Where exactly do the stage and real life meet? Where do we draw the line between traditional and popular music? Andrea Wozniak and Pierre-Nicolas Colombat, who started collaborating when they were students at the New England Conservatory, formed Duo Velour to explore the world of cabaret music in search of answers to these questions. Taking its name from the notorious attire of cabaret owner and performer Aristide Bruant, the duo’s repertoire spans from late 19th century European cabarets to the semi-staged songs of contemporary composers.

Michigan native soprano Andrea Wozniak’s wide ranging musicality shines just as brightly in the Greek mythology of Handel as in the ironic vagabond world of Weill. A frequent performer of new music, Andrea was in the world premiere of Ouroboros, presented by Beth Morrison Projects and White Snake Projects, as well as the first workshop performance of Cerise Lim Jacobs’ and Julian Wachner’s opera REV. 23.  She has also performed the roles of Lydia in Matthew Aucoin’s Second Nature and Grace Kelly in Michael Daugherty’s Jackie O.  Other recent operatic credits include Despina in Barn Opera’s production of Mozart’s Così fan tutte, Oberto in Opera del West’s production of Handel’s Alcina, and Serpetta in NEC’s production of Mozart’s La finta giardiniera.

As a teenager, Pierre-Nicolas Colombat’s gateway to more serious piano studies was through the music of Scott Joplin. Since then, he has continued his pianistic adventures studying in Chicago and Boston and his performances have taken him to France, Italy, Puerto Rico, Canada, and throughout the east coast of the United States. He has been the recipient of several prizes and performed in such venues as Jordan Hall, Isabella Stuart Garnder Museum, and the Orpheum Theatre among others. Colombat’s main interests lie in finding ways for music to serve as a connective tissue for local communities. Efforts in this regard have included producing a podcast, writing reviews, and forming the first Boston Community Studio Class. His biggest musical influences include his teachers Pavel Nersessian, Joshua Rifkin, Gabriel Chodos, Stephen Drury, George Vatchnadze, Aglika Angelova, and Amy Killian.