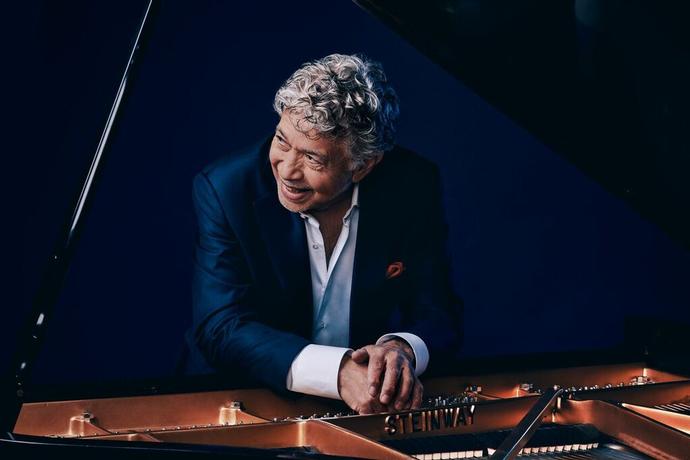 “I love Jamaica. I love America. I love them both together more than each one separately. I inhabit the rhythmic aspect of both things. I can’t explain why. I do it naturally and joyfully. I am confident and proud and privileged to say that I come from a multi-cultural and multi-ethnic thing. The slogan of Jamaica is like America’s ‘E Pluribus Unum,’ ‘out of many, one people.’”—Monty Alexander, 2014

For this New Years Eve Special Event, your ticket includes entrance to the show, as well as a three-course meal.

Fifty-five years after he moved to the United States from Kingston, Jamaica, his home town, pianist Monty Alexander is an American classic, touring the world relentlessly with various projects, delighting a global audience drawn to his vibrant personality and soulful message. His spirited conception is one informed by the timeless verities: endless melody-making, effervescent grooves, sophisticated voicings, a romantic spirit, and a consistent predisposition, as Alexander accurately states, “to build up the heat and kick up a storm.” In the course of any given performance, Alexander applies those aesthetics to repertoire spanning a broad range of jazz and Jamaican musical expression—the American songbook and the blues, gospel and bebop, calypso and reggae. Like his “eternal inspiration,” Erroll Garner, Alexander—cited as the fifth greatest jazz pianist ever in The Fifty Greatest Jazz Piano Players of All Time (Hal Leonard Publishing) and mentioned in Robert Doerschuk’s 88: The Giants of Jazz Piano—gives the hardcore-jazz-obsessed much to dig into while also communicating the message to the squarest “civilian.”

Born on D-Day, June 6, 1944, Alexander was playing Christmas carols by ear at 4, entertaining neighbors and relatives by 5, taking his first piano lessons at 6. He resisted formal instruction, but still, growing up in Kingston, absorbed all the musical flavors that comprise his mature sonic palette. “I soaked up everything—the calypso band playing at the swimming pool in the country, local guys at jam sessions who wished they were Dizzy Gillespie and Miles Davis, a dance band playing Jamaican melodies, songs that Belafonte would have sung,” he recalls. When Alexander was 9, his father, a Kingston merchant, brought him to hear and play for the legendary pianist Eddie Heywood. At 10, he saw Nat “King” Cole play at Kingston’s Carib Theater, the same venue where, at 13, he heard a concert featuring Louis Armstrong.

8PM / $110 Get Tickets
*Please note:
1. Final sale, no refunds, not transferable.
2. $15 food/beverage minimum per person not included in ticket price.
3. Seating first come at the door. Doors open 6 PM & 9:45 PM respectively.
4. Photography or Recording of any kind is prohibited during the performance.
5. Keep conversation to a minimum during the performance.