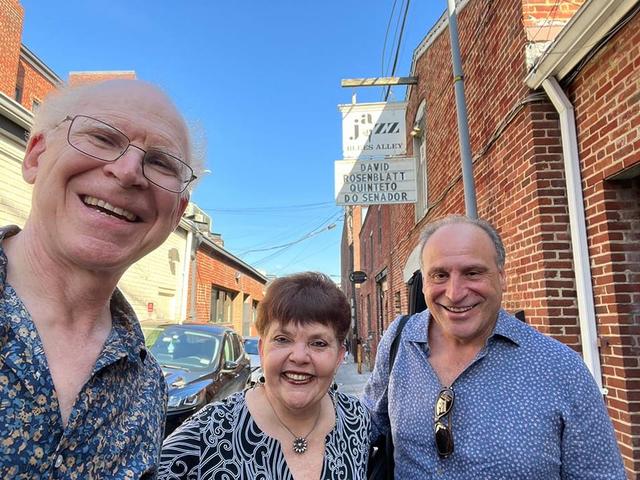 The Quinteto do Senador is a Blues Alley exclusive gathering of friends who are long-time contributors to the DC Brazilian music scene. “Senador,” or Senator, is the nickname of guitarist and composer, David Rosenblatt. For this first edition, David will be joined by: David Sacks- trombone/vocals/percussion Ergita "Gigi" McLaughlin - vocals and percussion Juan Megna - drums and percussion Steve Sachse - bass The repertoire will include a mix of Brazil inspired originals and classics from the Brazilian popular music repertoire.

David Rosenblatt is a guitarist and composer based in Washington DC. He studied jazz improvisation with Charlie Shoemake in Southern California, while also playing in the Pomona College jazz band, led by Bobby Bradford. A 1985 Thomas Watson Fellowship provided David the opportunity to return to Rio de Janeiro, Brazil where David had spent two years as a child. Since then, David has been blending jazz and Brazilian influences in his musical adventures.

9PM / $15 Get Tickets
*Please note:
1. Final sale, no refunds, not transferable.
2. $15 food/beverage minimum per person not included in ticket price.
3. Seating first come at the door. Doors open 6 PM & 9:45 PM respectively.
4. Photography or Recording of any kind is prohibited during the performance.
5. Keep conversation to a minimum during the performance.