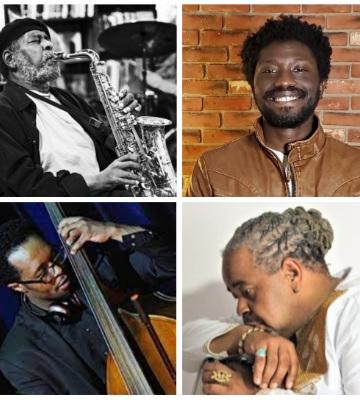 Grubbs has crafted a work of considerable color and depth in his Inner Harbor Suite; melodies, counter-melodies, blues elements of call and response, bebop rhythms, Afro-Cuban rhythms and avant-garde elements.  – Howard Mandel, DownBeat Magazine
The quartet takes the tonal centers of Trane’s “Giant Steps” as their shared springboard. Grubbs solos first, crafting a highly personalized tribute to the composer through a verbose series of high register note streams . . . his melodically-charged creations of Miles Davis’s “Four” supplies further fodder for spirited blowing and the quartet attacks the bop standard with a voracious improvisatory elán. – Derek Taylor, Cadence Magazine
“Grubbs opened the main show by lifting his alto saxophone and exploding into hot Latin riffs of his composition “Bossa.” His fierce blowing on “Saturn,”one of his signature tunes, was a highlight, and“Barbara Dear” featured tenderly blown harmonies by Grubbs on a tune honoring his wife. – Steve Monroe, Baltimore Jazz Alliance

A legendary jazz saxophonist with a distinguished career as a  performer, composer, music educator and recording artist, Carl Grubbs has toured with his ensemble in major cities world wide. He received early extensive training from John Coltrane, who was married to his cousin, Naima. Through his family, he was close to many of the history-making musicians of the 1950s and 1960s. With his brother, Earl, he formed The Visitors, a quintet that recorded four albums for the Muse record company in the early 1970’s.

He is a member of the Maryland State Arts Council - www.msac.org/touring-artists-roster/carl-g-grubbs

Limited in-person seats:  $25 / $10 full-time students with valid ID
Advance ticket sales end one hour prior to showtime; tickets may be purchased at the door, if any remain.
In-person attendees receive a link to the recording to view for one week.

Streaming  Cost is $15
The link will be revealed to live stream participants 15 minutes before the show
and will remain active for one week.

Get Access to the Live Stream After your purchase, you will receive a confirmation message FROM INSTANTSEATS. The message contains a link to the concert event page. The page will now display a countdown clock until the live concert link is revealed, 15 minutes prior to showtime.