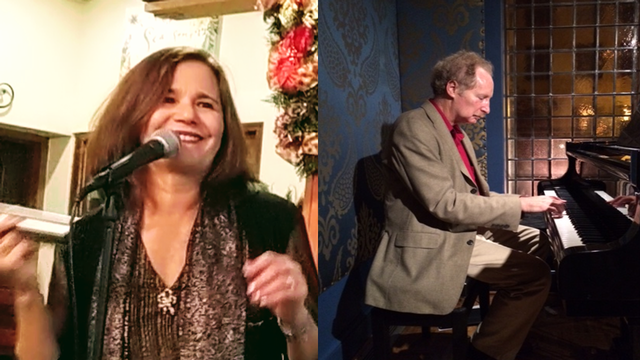 Etna Cantora (vocals) and Rob Orwin (piano, saxophones) are regular fixtures on the DC area Brazilian jazz scene. As a native Brazilian, Etna carries the rhythm of her country into her music. Singing has been a passion to her since childhood and only a few years ago she decided to turn this passion into the interpretation of living what-you-love. Her current repertoire spans Bossa Nova, Samba, Choro, and Forro, with a sprinkling of Jazz Standards, including songs by Tom Jobim, Baden Powell, Caetano Veloso, and Milton Nascimento. She has been performing in several locations across the DMV area, as a solo artist and at Twins Jazz with the Capital City Voices.

Rob earned a composition degree from Chicago Musical College, later studying jazz piano with DC’s own Wayne Wilentz, Tim Whalen, and saxophonist/ educator Jeff Antoniuk. As the resident composer of Momentum Dance Theatre, he composed and produced works in various genres before co-founding the Brazilian jazz quintet Travessia in 2001. He has since covered keys and winds for the neo-soul/R&B group DownTyme and piano for the Bob Schwartz Quartet, appearing on their Wammy-nominated CD, “Look for the Silver Lining.” Most recently he writes for and plays with Batida Diferente-- a quartet fusing Brazilian and American influences in a unique blend of jazz and pop-- and Tempus Fugit, a straight-ahead quartet playing originals and re-imagined covers.  Rob has performed at Blues Alley, Twins Jazz, Mr. Henry’s, Columbia Station, 49 West, the Rehoboth Jazzfest, and other DC-area venues.

Juan is from Argentina and spent 12 years in Brazil, earning a degree in Brazilian Popular Music at the State University of Campinas in San Paulo.  In 2015 he moved to Cincinnati, OH and earned his Masters Degree in Jazz Performance. He is currently pursuing a Doctor of Musical Arts at George Mason University where he also directs the Mason Latin American Ensemble. As a demanded performer in the DC musical scene, Juan performs with Mike Cemprola, David Jernigan, Wade Beach, and Cris Stiles, among others. Juan also plays with Latin local artists, such as Emmanuel Trifilio, Cristian Perez (Argentina), Cissa Paz and Rafael Pondé (Brazil).