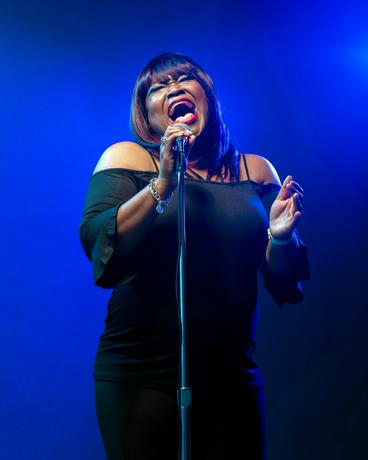 “Shemekia Copeland is a powerhouse, a superstar…She can do no wrong” –Rolling Stone

“Copeland provides a soundtrack for contemporary America…powerful, ferocious, clear-eyed and hopeful…She’s in such control of her voice that she can scream at injustices before she soothes with loving hope. It sends shivers up your spine.” –Living Blues

Shemekia Copeland has performed thousands of gigs at clubs, festivals and concert halls all over the world, and has appeared in films, on national television, NPR, and in magazine and newspapers. She’s sung with Eric Clapton, Bonnie Raitt, Keith Richards, Carlos Santana, Dr. John, James Cotton and many others. She opened for The Rolling Stones and entertained U.S. troops in Iraq and Kuwait. Jeff Beck calls her “amazing.” Santana says, “She’s incandescent…a diamond.” In 2012, she performed with B.B. King, Mick Jagger, Buddy Guy, Trombone Shorty, Gary Clark, Jr. and others at the White House for President and Mrs. Obama. She has performed on PBS’s Austin City Limits and was recently the subject of a six-minute feature on the PBS News Hour. Currently, Copeland can be heard hosting her own popular daily blues radio show on SiriusXM’s Bluesville.

With Uncivil War, Copeland is determined to stand her ground, help heal America’s wounds and continue to mend broken hearts. She brings people together with her music, a spirited amalgamation of blues, roots and Americana. She’s anxious to bring her new songs to her fans around the world as soon as possible. Of the new album Copeland says, “I’m trying to put the ‘united’ back in the United States. Like many people, I miss the days when we treated each other better. For me, this country’s all about people with differences coming together to be part of something we all love. That’s what really makes America beautiful.”