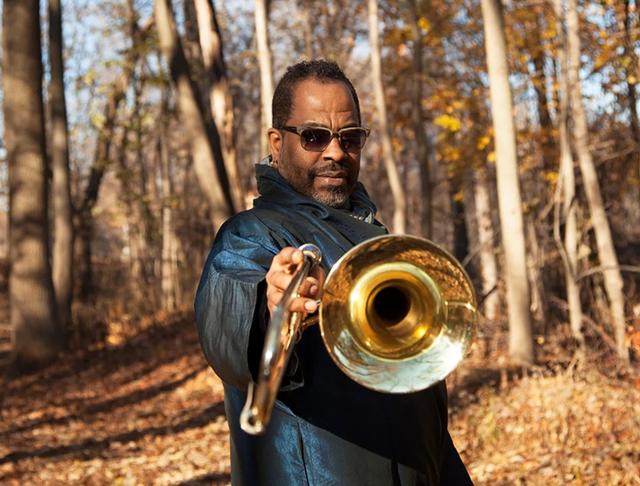 Clifton Anderson is considered one of the leading trombonists and composers performing in Jazz today. His performances embody the fertile and varied history of musical experiences he’s enjoyed working with a who’s-who of musical giants, from Sonny Rollins, McCoy ner, Dizzy Gillespie, Slide Hampton, Lester Bowie, Frank Foster, Charlie Haden and Dee Dee Bridgewater to Stevie Wonder, Keith Richards, Paul Simon, The Mighty Sparrow and Merv Griffin among others. He is not only noted for his rich personal sound on the horn but for his abilities as a composer and musical interpreter. His identifiable sound and memorable compositions have drawn an ever-expanding audience to his recordings and performances.

Clifton was born in Harlem, New York City into a musical family and from an early age showed an affinity for music. At 7 yrs. old he received his first trombone from his uncle, Jazz Legend Sonny Rollins. Clifton attended the prestigious Fiorello LaGuardia High School of Music and Art and is a graduate of The Manhattan School Of Music. During his college years Clifton joined groups led by Frank Foster and Carlos Garnett and became one of the original members of Slide Hampton's "World of Trombones". He quickly became one of the young in demand trombonists on the New York scene and in 1983 he joined his uncle's band.

Clifton’s work with Rollins as a featured soloist and producer is well documented. In addition to numerous world tours with Rollins, Clifton has appeared on ten of Sonny's recordings and produced 3 CD's and 1 DVD for Sonny's DOXY label. In 1997 Clifton recorded his first CD for Milestone records (now Concord) entitled landmarks. In 2009 Clifton released Decade on the DOXY/UNIVERSAL label. Critical acclaim for Decade along with great live performance reviews led to Clifton’s nomination for "Trombonist Of The Year" from The American Jazz Journalist Association. Clifton's nest offering And So JPe Carry On was voted "One Of The Top Jazz CD Releases Of 2012" by Jazz Inside Magazine. It reached #4 on Jazz radio, remaining in the top 20 for several months. It has been called “The Jazz Anthem For The People”. Clifton’s latest recording, Been Does T’Jiis Stead Before on the Ropeadope label, has been called “An Instant Classic” by critic Thomas Pena and has placed on “Best of 2021 Recordings” lists. Clifton’s title track co-delivered by the great Andy  Bey is a statement  on  racial injustice  that is both  soul-stirring  and  undeniable.  His live shows have followed the standard set by his recordings as he continues to play to very enthusiastic and appreciative audiences. Clifton has performed with his stellar sextet at major festivals in the United States and Europe.