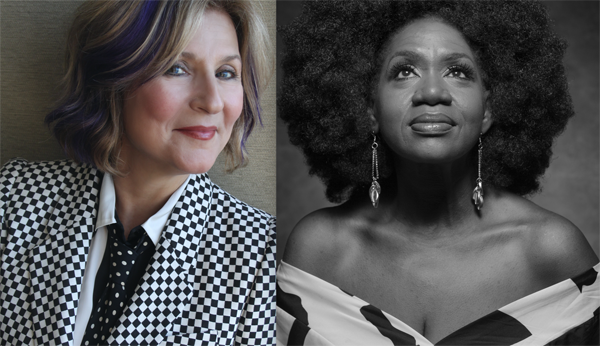 Sharón Clark and Janis Siegel team up to showcase some of their favorite songs, including gems from the 1960s and 1970s. They're joined by the Chris Grasso Trio.

Over the past four and a half decades, the voice of Janis Siegel, a nine-time Grammy winner and a seventeen-time Grammy nominee, has been an undeniable force in The Manhattan Transfer's diverse musical catalog. Alongside her career as a founding member of this musical institution, Siegel has also sustained a solo career that has spawned almost a dozen finely-crafted solo albums and numerous collaborative projects, amassed a large international fan base and garnered consistently high critical praise.

Over the years, Janis’ unmistakable voice has become one of The Manhattan Transfer's most recognizable trademarks. She sang lead on some of the Transfer’s biggest hits, such as “Operator,” “Chanson D’Amour,” “Twilight Zone,” “Birdland,” “The Boy from N.Y.C.” “Spice of Life”, ”Ray’s Rockhouse”, “The Shaker Song”, “Mystery”, and co-wrote and sang lead on the Grammy winning “Sassy”. She also gained a reputation as a vocal arranger by writing five of the charts for the group’s acclaimed masterwork, Vocalese, seven charts for the group’s Grammy-winning album Brasil, and won a Grammy herself in 1980 for her arrangement of “Birdland.” In 1993, she and her Manhattan Transfer colleagues received their honorary doctorates from the Berklee School of Music, and in 1999 they were among the first class of inductees into the Vocal Group Hall of Fame.

These days, you can find Janis in the place she loves most, the studio, producing various ventures for other artists and singing on a wide array of projects, touring with her trio, teaching at universities and high schools, and paying tribute to her idol Ella Fitzgerald in a new show called “ELLA- A Life in Song.”

2012 found Janis and her Manhattan Transfer partner Alan Paul representing America as teachers and judges for the very first online singing competition in China , “ROCK THE WEB!” The finals of this competition were televised from Beijing.

Her 10th solo CD, released on Palmetto Records, is called “NightSongs” and her two most recent solo collaborations are “HONEY & AIR” a Brazilian/jazz vocal adventure with her group REQUINTE TRIO, along with percussionist/singer Nanny Assis and pianist John di Martino and “SOME OTHER TIME” a tribute to Leonard Bernstein with trombonist/singer Nils Landgren.

Siegel – who is a life-long resident and lover of Manhattan, feels that some styles are timeless and universal, regardless of prevailing trends. “I think people will always respond to emotion and to great songs sung well,” she says. “When you come down to it, people want to feel something.”

“Sharón Clark’s impeccable scat singing, phrasing and ability to improvise have made her one of the most popular American jazz vocalists in Russia.”

Ms. Clark has made countless international tours, from Europe to Southeast Asia, the Middle East and Russia, where she has developed a major following. Ms. Clark has performed as a featured soloist with the Duke Ellington Orchestra, Smithsonian Jazz Masterworks Orchestra, the Richmond Symphony, and the Baltimore Symphony.