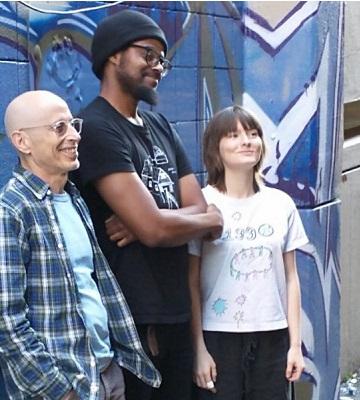 A great trio concert not to be missed by fans of improvised music.

Luke Stewart is a D.C. based bassist, saxophonist and activist whose work and associations defy genre and easy definition.  He had the honor of studying and performing with saxophonist Hamiett Bluiett.  Recently he led a 12-member ensemble in an hour-long tribute to John Coltrane on his birthday at the legendary Bohemian Caverns.  He is also a member of Trio OOO, a collaborative ensemble featuring saxophonist Aaron Martin, and drummer Sam Lohman. In addition, he has helped establish CapitalBop.com, a DC-based jazz website and 501c3 non-profit organization, as its Avant Music Editor.

Zoh Amba is a saxophonist from Kingsport, Tennessee who since moving to New York in fall 2021 has quickly emerged into a notable presence in the avant garde scene. Zoh has spent considerable time studying with David Murray in New York, and also at the San Francisco Conservatory Of Music & New England Conservatory. The endorsement and collaboration with the creative music world’s most notable sound painters means Zoh is poised to continue her ascent in New York and beyond. She has her debut record O, Sun releasing on Tzadik March 18th, 2022. With Micah Thomas, Thomas Morgan, and Joey Baron. Produced by John Zorn.

In -person attendees receive a link to the recording to view for one week.

Streaming  Cost is $15
The link will be revealed to live stream participants 15 minutes before the show
and will remain active thru Sept. 22