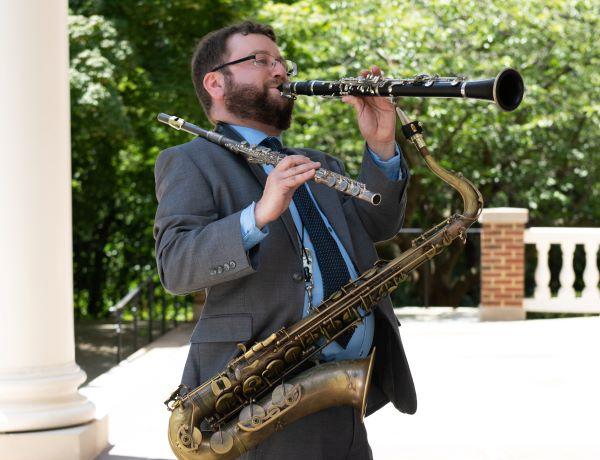 PROOF OF COVID VACCINATION IS REQUIRED

Seth Kibel is one of the Mid-Atlantic’s premier woodwind specialists, working with some of the best bands in jazz, swing, klezmer and more.  Wowing audiences on clarinet, saxophone, and flute, Seth has made a name for himself in the Washington/Baltimore region, and beyond. He has been the featured performer with The Kleztet, Bay Jazz Project, Music Pilgrim Trio, The Natty Beaux, and more.  Winner of 28 Washington Area Music Awards (Wammies), including “Best World Music Instrumentalist” (2003-11) and “Best Jazz Instrumentalist” (2005, 2007-8, 2011-14). His most recent recording, "When You're Smiling," was released in 2018 on the Azalea City Recordings record label.  His song "New Waltz" was the Grand Prize winner of 2016 Mid-Atlantic Song Contest (MASC), sponsored by the Songwriters' Association of Washington (SAW).  When he's not performing, Seth frequently lectures on a variety of topics in music history for numerous institutions, including the Osher Lifelong Learning programs at Johns Hopkins and Towson Universities

A charming Southern Belle in both manner and spirit, Karla was born and raised in Dallas, Texas, and studied vocal performance at the storied music program at the University of North Texas. After stints in Washington and Los Angeles, she now makes her home on the west side of Baltimore, not far from the old vaudeville theaters where Billie Holiday sang her soul out to the salty-aired night. Karla plays gigs all over the Baltimore-Washington area, including spots with musicians who regularly round out sessions with the likes of Prince, Justin Timberlake, Al Dimeola, Bebe Wynans and Eva Cassidy. At 18, Karla debuted at Switzerland's famous Montreux Jazz Festival. In 2009, she shared a stage with Mary Wilson of the Supremes. She has toured in the Greek Isles and Dubai, but feels just as comfortable reinvigorating the standards in front of a hometown crowd at Baltimore's Federal Hill Jazz and Blues Festival.