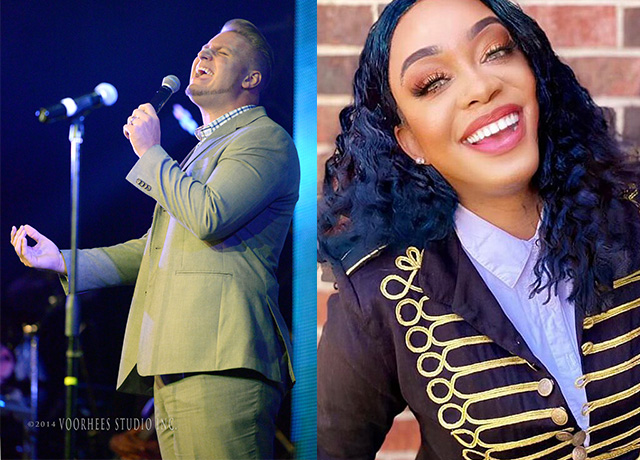 Jordan Applegate was born and raised in Fort Wayne, IN. Received training from The Voices of Unity and a personal music mentors, Marshall White & GorDon Martin, and developed his unique sound. Applegate, a 5-year scholarship athlete at Ball State University, made a commitment to stay connected to music while playing college football and pursuing a Bachelor's Degree in Human Resources Management from Ball State University's Miller College of Business. He traveled with the World Champion Voices of Unity as an alumnus and guest soloist, when VOU competed in the World Choir Games in both Shoaxing, China (2010) and Riga Latvia (2014). In 2016, he had the honor of being the Tour Manager for UNITY's Journey to The Vatican Tour, which was a 2 week, 3 country tour that included a historical performance at St. Peter's Basilica, "The Vatican." Applegate currently works as the Director of Recruiting at Sweetwater Sound in Fort Wayne, Indiana, where he and wife, Heather reside with their 3 children, Malachi (5), Judah (3) and Arianna (6 mos). Jordan was a Worship Leader for a number of years with Heartland Worship (Indianapolis). Heartland Worship released their debut EP,  "Light Up My Life EP" in 2014. Their EP was widely seen when it reached the #8 spot on iTune's Daily Christian and Gospel Album Charts. The following year, they released their full length album with original worship music, titled He Is. He Is was widely accepted and peaked at #3 on iTunes Christian and Gospel Album Charts and also was #3 on Billboard's Heatseekers - East North Central Charts. Applegate is currently the Worship Leader at City Church in Fort Wayne and one of the lead vocalist for Fort Wayne, local favorites, Casual Friday.

Mesie Augustine was born in the beautiful island of Trinidad and Tobago. She was raised in both the United Kingdom and the Midwestern region of the United States. Through-out her life her prolific gifts as a singer-songwriter have been featured in arenas alongside artists such as Yolanda Adams, Kim Burell, PJ Morton, Micheal W. Smith, and Hillsong. She was the youngest contestant of her season to gain a top 20 spot in the internationally acclaimed show Sundays best,and she has written and featured in a number of Christian hits that charted within the top three slots of the Billboard Christian charts. She is currently travelling and leading worship with the internationally recognized group RUN51, while she completes her Doctor of Psychology (Psy’d). Her long-awaited solo project is set to be released in the early part of 2022. Above all She credits her incredible family and her love and desire to inspire the world through Christ, as the driving force behind her musical pursuits. Her heart is to be a consistent reminder of the light that we hold within us.