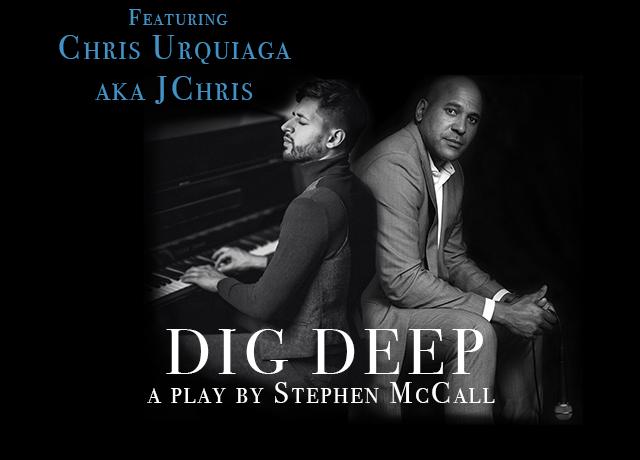 Stephen McCall is excited to make his NYC solo show debut at The Triad Theater, accompanied by singer-songwriter Chris Urquiaga (JChris). “Dig Deep”, is a story about his life struggling with adversity, bullying, Tourette syndrome, depression, and teen suicide.

In collaboration with JChris, a Latin pop virtuoso internationally recognized for his pop compositions, Stephen takes his audience in spoken word and song on a journey to motivate and engage while sharing how to take a mess in life and turn it into a message. Through tears, suspense, drama, and laughter, “Dig Deep” is guaranteed to empower you to never give up, dream big and turn your impossibles into reality.

About Stephen
Stephen is an author, playwright, keynote speaker, and a single dad raising two. Around age 9, he began to show symptoms of a disorder called Tourette Syndrome. A black kid from Detroit with a disability, raised in a single parent home, and labeled as a problem child with no future, life as Stephen knew it was a mess - there was no point in living. A distinguished military veteran (US Air Force), a senior advisor for the U.S. Congress (present), and meeting with foreign countries' Vice Presidents, for Stephen seemed near impossible.

Stephen always dreamt of having a show on Broadway and with his humorous method of storytelling and passion for writing, this daring idea of producing his own show was born. This is not your ordinary “reading” of a new show so buckle up and get ready for the ride of a lifetime!

About Chris
Chris (JChris) is a recording artist, pianist, and producer debuting his new song in collaboration with Stephen. Chris is no stranger to NYC! He recently starred in “Chris Urquiaga & Broadway Friends” at Feinstein’s/54 Below. He is lauded for his exciting performance energy and smooth voice. Hailed as “…the next big thing” by Metro Weekly magazine. Internationally recognized for his pop compositions which are laced with R&B melodies and Latin rhythms. Chris recently recorded a music video in Brazil with chart-topping Latin superstar, Naldo Benny. Other credits: featured singer for the Hispanic Swearing-In Ceremony for the 116th US Congress; performed for President Barack & Michelle Obama at The White House; and guest performer at the Conservatorio Nacional de Música in Lima, Perú; and among other venues in the US, South America, and Europe.

Chris is currently composing a musical comedy about gentrification called “Mr. Manhattan!” with lyricist Jordan Silver in New York City, along with being the former Artistic Director of Congressional Chorus, producing in-person and virtual concerts.
To learn more about Chris visit: https://jchrisofficial.com

Enjoy an evening of entertainment while Stephen shares his story in this live performance. In honor of the late Lauren Widner (1978-2020), along with Ryan McCurdy (pianist), Ellis Gage (broadway actor) will sing a new song written and composed by Lauren and Ryan, inspired by the life journey of Stephen McCall.

By law, all eligible patrons must show proof of COVID-19 vaccination upon arrival to gain admittance to the theater. Those ineligible for vaccination must show a negative COVID-19 test from within 48 hours of arrival. Lack of proof will result in denial of entry with no refund.