Sharon Sable and Joe Holt: The Music of Blossom Dearie 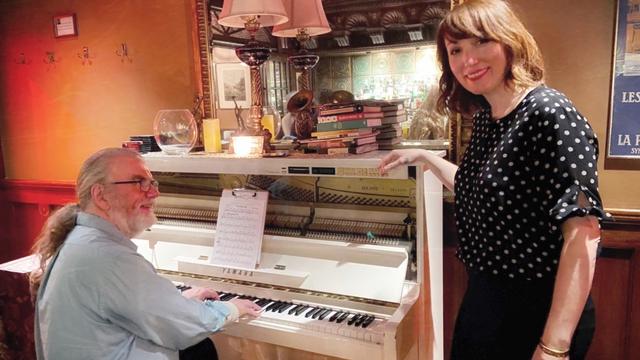 In 2019, Sharon Sable and Joe Holt performed a Blossom Dearie arrangement of Tea For Two in a Mainstay Monday
show,  their very first performance together. It was a seamless moment in which they both felt at home. So much so, that they decided to work on a project to honor the unique voice and repertoire, extraordinary piano accompaniment, and remarkable career of Blossom Dearie. With a career spanning six decades, Blossom’s recordings are still delighting a loyal following of music lovers and fellow musicians. Bill Evans, Annie Ross, John Lennon and Miles Davis were just some of her fans. The combination of her unpretentious vocal delivery and remarkably tasteful piano accompaniment made her music ethereal, understated, impressive and bold, all at the same time. Blossom Dearie performed in a variety of places from the small Jazz clubs and cabarets of Paris, London and NYC, to concert audiences at Carnegie Hall. She recorded many songs of the Great American Songbook (including the lesser known gems), was one of the voices of the Grammy nominated “Schoolhouse Rock” album, and went on to write and record original material with many and varied artists such as Johnny Mercer, Michel Legrand and Sting.

Sharon Sable, originally from Atlantic City, found herself immersed in the teen pop world as a young recording artist for LaFace/Arista records in Atlanta at the age of 17. After falling in love with what she refers to as some of the most
beautiful songs ever written, she returned to the South Jersey area and found solace, inspiration and an insatiable
appetite for the hidden musical treasures that lay beyond the top 40. She began performing with the area’s finest
musicians and hasn’t looked back.  Her repertoire ranges from lilting swing and ballads of the Great American Songbook, Brazilian Bossa Novas, French love songs, and Jazz arrangements of contemporary pop music. Sharon is recognized as one of the region’s most beloved interpreters of song with frequent appearances throughout the east coast including her current hometown of Wilmington, DE.
Joe Holt is a familiar face to Mainstay audiences, hosting the weekly "Mainstay Monday" series beginning in 2016.  Joe is known for his whimsical improvisations and signature spontaneity as a piano soloist, in addition to being a sensitive accompanist and collaborator. He appears on over 30 independently released recordings and is on the music faculty of Washington College.

After your purchase, you will receive a confirmation message. The message contains a link to the concert event page. The page will now display a countdown clock until the live concert link is revealed, 30 minutes prior to showtime.