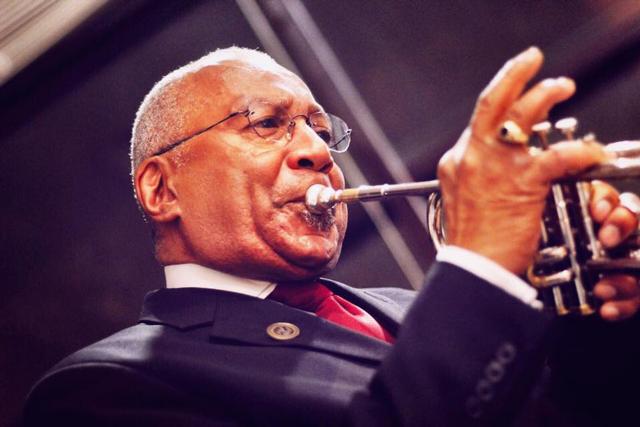 Trumpeter Dr. John R. Lamkin II received his undergraduate degree South Carolina State College, his Masters Morgan State University, and his Ph.D. in Curriculum and Instruction with a concentration in Music Education from the University of Maryland at College Park. He taught in the public school systems in South Carolina and Baltimore, Maryland, before joining the faculty at the University of Maryland Eastern Shore in 1984. He retired from UMES in 2014, but continues to teach trumpet students and regularly plays with his band, the John Lamkin “Favorites” Jazz Quintet.

Professionally Dr. Lamkin has performed with the Manhattans, the Dells, Stephanie Mills, Maurice Hines, Sonny Stitt, Charlie Earland, Vaughn Freeman, Frank Foster, Harvey Mason, Cyrus Chestnut, The Washington Jazz Battalion, The Baltimore City Big Band, the Lynn Gray Orchestra, the Now is the Time Big Band, the Blue Moon Big Band and the Hank Levy Legacy Big Band. Dr. Lamkin has also performed with his own jazz ensembles in various night clubs, and for many parties and weddings in and around the Baltimore-Washington area. In the mid-1980s, Dr. Lamkin recorded his only album titled, “Hot” which is still available on vinyl.

A native of Atlantic City, NJ, Dr. Lamkin grew up during a time when live jazz music filled its streets, especially during the summer months. It was during his formative years in Atlantic City that he fell in love with music – particularly jazz music as it was being featured in the various night spots throughout the Atlantic City community at that time.