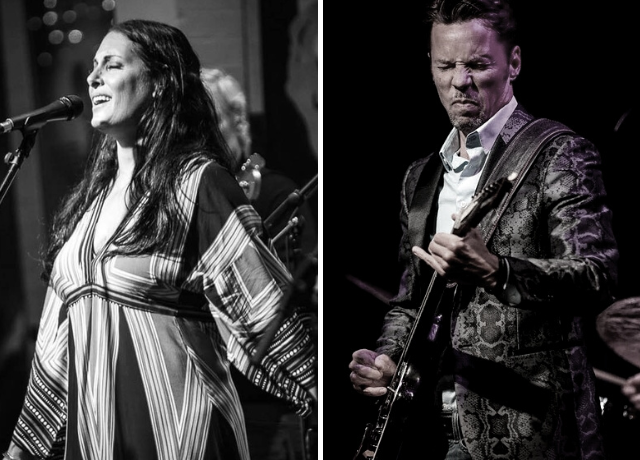 Feel the rhythm and blues with Rebekah Meldrum + Paul Holdman for a groovin' Watch Out Wednesday performance.

Every track on Rebekah Meldrum's self-titled debut is steeped in the love and the passion she has for the genre. It's almost a religious reverence, which makes perfect sense considering she's a preacher's daughter who grew up singing gospel in church. "Gospel and blues have always been so closely related," she opines. "It's like there's a fork in the musical road, one way, it's the gospel, and the other is the blues. I was exposed to Koko Taylor when I was eight years old, and right then, I knew which road I was going to take." But her precision is by no means cut and dried or predictable; she is methodical, if not hypnotic, weaving a spell across seven songs that reflect the multi-decade journey it's taken for her to get here as much as the destination itself. From the way the very first notes drop you right into the delta, through excursions that go from the backcountry to steamy, inner-city grooves and all the way through to New Orleans-inspired horns that wind the album down, she is in firm command of every aspect of the songwriting process. "Everything took a big turn when I stopped writing on guitar and started singing the melodies in my head," she relates, " even the guitar riffs and the solos. Then Paul (longtime collaborator, guitarist/singer Paul Holdman) translates it all and embellishes it with his own nuances—when we put it together like that, the magic happens." It is magic, but it's no illusion. Rebekah Meldrum is a master magician who's just beginning to reveal her bag of tricks.

Paul Holdman started his career in 1990 joining the Indianapolis based band Bangkok Rooster. They recorded one album and worked steadily until 1998 opening for many well known acts such as Santana, Robben Ford, Luther Allison and Rick Derringer among many others. During that time Paul did brief stints with Hoosier notables Carrie Newcomer and Larry Crane. During his time with Crane, Paul developed a friendship and song writing partnership with Jennie DeVoe, a relationship that continues to this day.

In 1998 Paul joined the Gordon Bonham Blues Band and has continues to work with Gordon. In 2000 Paul joined the Tad Robinson Band and also formed The Woomblies with founding member Phil Pierle. In 2015 Paul released a Gospel Blues album entitled "In the Hands of God" that includes collaborations with Ronnie Earl, Jennie DeVoe, Tad Robinson and Rebekah Meldrum. During those collaborations Paul and Rebekah formed a partnership resulting in two albums thus far.

Paul has continued to perform and record for over 21 years now with Tad Robinson, The Woomblies, Jennie DeVoe, Bill Price, Gordon Bonham and occasionally the Paul Holdman trio. Paul has performed on stage with national Blues legends such as Ronnie Earl, Jimmy Johnson, Alex Shultz, and Dave Specter to name a few, and has played with a who's who of Indianapolis luminaries on stage and in the studio. He is currently working on a new album project with Rebekah Meldrum and Gordon Bonham for Rebekah's latest effort