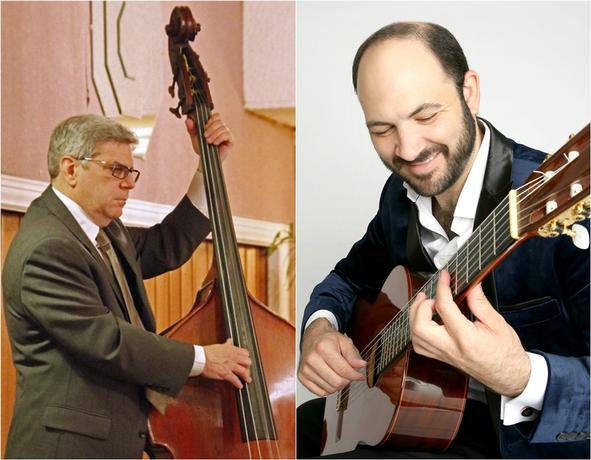 Jazz bassist Tommy Cecil has been active in the Washington, DC jazz scene since 1976 when he moved from his hometown Baltimore, MD. He has established himself as one of the most in-demand players in the area. Tommy has had long associations with many of DC’s favorite jazz sons, including John Eaton, Buck Hill, Charlie Byrd, Dick Morgan, Shirley Horn, Brooks Tegler, and the Redd Brothers. As a freelancer, Tommy has worked with Mose Allison, Tommy Flanagan, Joe Henderson, and many other star artists. Concert appearances have taken Tommy throughout the U.S. and overseas.

The critics and cognoscenti agree: jazz guitarist Nate Najar’s virtuosity exudes a dynamic and truly intoxicating elegance. His artistry evokes a modern and progressive attitude that perpetuates the legacy of the great Charlie Byrd. But while Najar’s imaginative playing is steeped in Byrd’s tradition it nevertheless emulates a collection of other artistic musical influences, including classical, bebop, fusion, bossa nova and even post modern, which have all culminated to inspire a player whose sophisticated and often innovative artistry has placed him in many of the world’s most prestigious music venues and produced many superb recordings.