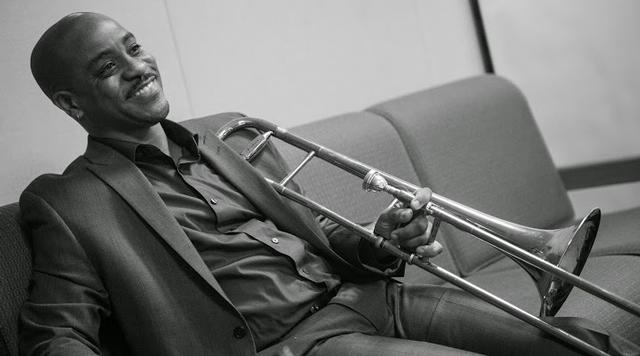 REGINALD CYNTJE (born in Roseau Dominica and raised on St. Thomas, USVI) is a trombonist, educator, producer, and composer. He has created and performed an eclectic range of music. When you listen to Cyntje perform, you hear a passion for life and love in his sound.

Growing up in the US Virgin Islands (USVI), he was steeped in the rich cultural music known as Quelbe (the official music of the USVI). Quelbe was Reginald’s introduction to improvised music.

With cultural heritage at the forefront and social justice as the message, he has “a deep-seated knowledge of Caribbean music and culture which has settled into his jazz trombone playing” (NPR Music).

To date, Cyntje has recorded five albums as a leader. Rise of the Protester (2019), “Equal parts love and righteous force” (CapitalBop), is his most recent album.

Spiritual Awakening (2015) was featured on NPR’s Jazz Night in America. This album won Cyntje the title of Washington City Paper’s Composer of the Year.

In 2013, Cyntje released his sophomore album, simply titled Love. The Washington City Paper said Love “is thoughtful and surpassingly gorgeous.” After debuting at #3 on the CMJ Jazz chart, Love made it to #10 on the CMJ Top 40 Jazz Chart.

His first album, Freedom's Children: The Celebration, was released in August of 2011.

In 2017, Cyntje had the honor of being invited to Cochabamba, Bolivia to conduct master classes and perform with the D Jazz Big Band for the 60th Anniversary of Centro Boliviano Americano. The trip was sponsored by the US Embassy in Bolivia.

Cyntje, “blessed with impressive facility and an immediacy of sound” (The Independent Ear) now resides in the Washington DC area. Capital Bop views him as “arguably D.C.’s most agile and expressive trombone player.”

Cyntje is a graduate of the University of the District of Columbia and received his master’s degree at the University of Maryland. Additional studies include semesters at Berklee College of Music, Howard University, Montgomery College, the Naval School of Music, and Interlochen. He is also a veteran of the US Army (389th Army Band) and the DC National Guard. Currently, he leads his own groups and works as a sideman in numerous bands.