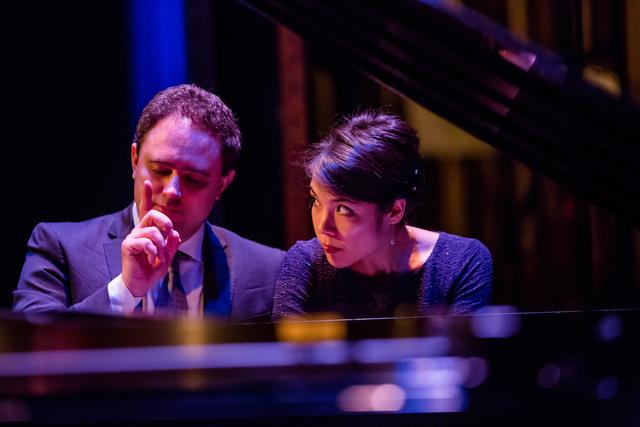 “I love to hear Stephanie and Paolo together. They are an inspiration. Such sympatico! Such back-and-forth! Individually they are marvelous musicians—we’ve known that, but together they play 4-handed stride as it’s never been done. Brava, bravo!”

“They blend humour and showmanship with impeccable technique and mature musicality”

With their wide spectrum of styles (both in piano solo and in four-hands) Stephanie Trick and Paolo Alderighi will cover about 50 years of jazz piano history, from stride piano to swing, from ragtime to blues and boogie woogie. The repertoire will also include some of their fresh interpretations of classics from Tin Pan Alley and from the Golden Age of Broadway and Hollywood.

Stephanie Trick and Paolo Alderighi keep the legacy of classic jazz piano alive with their piano solos and brilliant four-hands piano arrangements. Their duo project is an evening of pure entertainment!

Pioneers in the use of four-hands piano in jazz, Stephanie Trick and Paolo Alderighi have earned widespread success with their arrangements of classics from the stride piano, ragtime, and boogie woogie repertoires, as well as from the swing era and the Great American Songbook. They have performed across the United States, Europe, and Japan, winning the acclaim of critics and fans alike. Blending impeccable technique and mature musicality with humor and showmanship, they are considered the most engaging piano duo dedicated to the repertoire of classic jazz.

Stephanie (from St. Louis), a leading exponent of stride piano, and Paolo (from Milan), one of Italy’s foremost jazz pianists, met at a piano festival in Switzerland in 2008. Three years later, they started to collaborate on a four-hands piano project dedicated to classic jazz, preparing arrangements of songs from the swing era, as well as drawing from the ragtime and blues repertoire. Following the release of their first album, Two for One (2012), they have been invited to perform widely in the United States, Europe, and Japan. A second CD,Sentimental Journey (2014), shows Stephanie and Paolo’s commitment to the formula of four-hands duets on one piano, rarely used in jazz. Their partnership continued with Double Trio Live 2015 and Double Trio Always (2016), recorded in the piano trio setting, but with two pianists instead of one. In 2018, they released their first album on two pianos, Broadway and More.