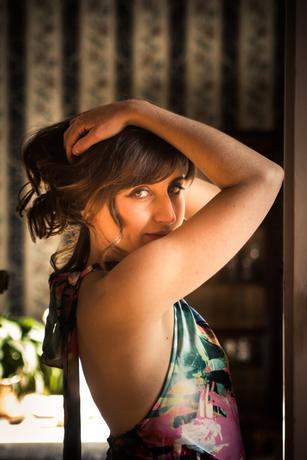 Izzi first documented her formidable talents on her well-received 2013 debut album, Motifs (Dot-Time), singing in English, Italian, Spanish and Portuguese on an 11-track program that spanned the American and Brazilian Songbooks, Tango, high-level Euro-Pop, and Mainstream Jazz Vocalese and Scat. Izzi navigated each idiom fluently, on its own terms of engagement, displaying her prodigious vocal instrument, refined musicianship, inherent soulfulness, and ability to convey both emotional transparency and ebullient swing. In an All About Jazz review Michael Bailey praised Izzi as “force of nature,” while in Jazz Times Travis Rogers described her as “a talent to be heard, admired and anticipated.”

10PM / $25 Show Postponed - New Date TBA
*Please note:
1. Final sale, no refunds, not transferable.
2. $12 food/beverage minimum per person not included in ticket price.
3. Seating first come at the door. Doors open at the earliest of 6 PM & 9:45 PM respectively.
4. Photography or Recording of any kind is prohibited during the performance.
5. Keep conversation to a minimum during the performance.