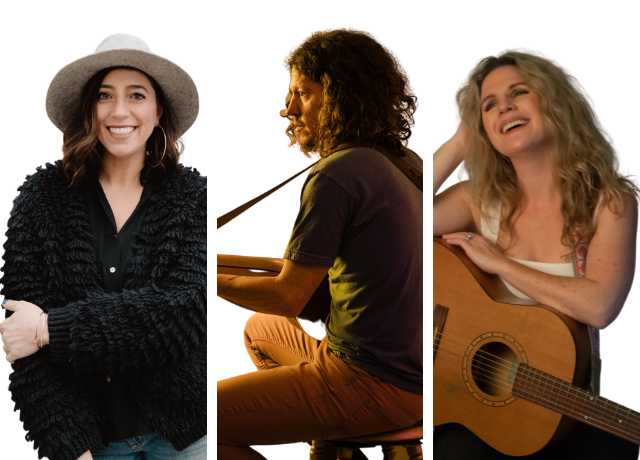 An intimate night with story & song.
Sarah Scharbrough McLaughlin is a world-class performer, songwriter and worship leader, whose music has taken her around the globe. Her soulful, eclectic sound combines a rich tapestry of influences, including her classical and jazz training, and a broad spectrum of experiences in gospel, pop, and country music.

Sarah has released six original studio albums and her interpretations of classics breathe fresh life into time-honored favorites, and her original songs express both the depth of her musical gift and a soulful honesty that sets her apart as a rare treasure to Central Indiana and the world. An Indiana native and Anderson University graduate, Sarah’s voice can be heard on local and national commercials and radio jingles for brands like New Balance, the Indianapolis Colts, Cedar Point Theme Park, and many more. She has been featured on two Emmy Award-winning TV shows: Artrageous with Nate, and Cook and Belle’s Playhouse. She has collaborated and performed with Grammy Award-winning artists Bill and Gloria Gaither, Sandi Patty, Kurt Elling, as well as The Wright Brothers, Josh Kaufman, Alanna Story, Jon McLaughlin, Cook & Belle, Jennie Devoe and countless others. In 2001, Sarah married her college sweetheart, Jeff McLaughlin, who is a music educator at Westfield High School and highly respected performer. The McLaughlins have put down their roots in Noblesville where they reside with their five children.

Cliff Ritchey gathers his songwriting inspiration from the simple country life he surrounds himself with in Markleville, Indiana. His desire is to connect with people on a deeper, more vulnerable level through his music. Stylistically, Cliff's songwriting ranges from acoustic heartfelt Americana/Folk tunes to songs with complex progressions and melodies that fit tightly inside a simple acoustic production.

Cliff has also served as a touring guitarist for Jon McLaughlin, Josh Kaufman and Latin recording artist Jaci Velasquez in addition to raising a family and maintaining a busy schedule as a commercial photographer.

Katherine Nagy is a singer and songwriter who released her debut EP "Gypsy Lady" in March 2017 and followed it with the release of a full length album "Heartsongs" in 2018 and then multiple EP's and Singles. Katherine was raised in Ireland, so you may hear a slight Celtic influence combined with her love of folk in her songs. Her lyrics are authentic and her delivery sincere with lyrics reflecting on love, hope, dreams, motherhood and finding purpose. She lives in Indianapolis, IN with her husband, 3 children and dog.