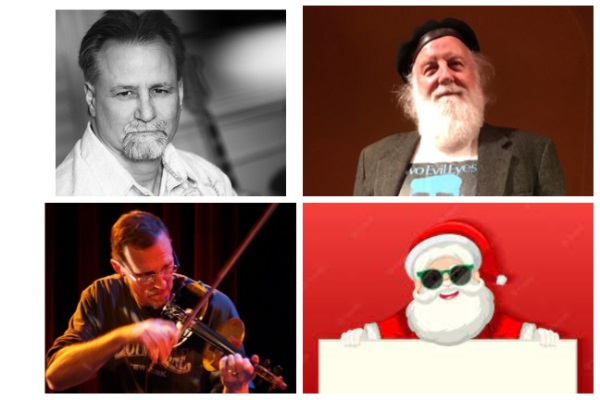 Limited in-person seats:  $15
Advance sales end one hour prior to showtime. Tickets can be purchased at door, if any reamain.
In-person attendees receive a link to the recording to view for one week.

Streaming  Cost is $12
The link will be revealed to live stream participants 15 minutes before the show
and will remain active through Dec. 11

Tony Denikos embodies Americana with its deepest roots and its latest reinvention. Tony's music is as witty as it is cutting, as purposeful as it is reflective. In 2020, he released "Gravity Wins," a stripped-down, raw and romantic take on life in all its guises. Tony collaborates with Scott and Jen Smith, Geoffrey Himes and David E. Moulton on three tunes and pens the rest of this ten-track collection on his own. From South Carolina to Texas, from Nashville to upstate New York, you can find Tony performing in any number of configurations. Be it an intimate acoustic solo show to a full-on, five- piece band, Tony's shows are always a treat. For this show, his first return to the Roots Café since the pandemic, he will be performing three original Christmas songs plus numbers from his latest album.  https://www.tonydenikos.com

Santa Claus is the legendary pioneer of Arctic-rock, which swept the northern latitudes in the 1960s. Borrowing elements of Chet Baker's “cool jazz” and Jerry Butler's “Ice Man” soul, Claus crafted a “snowbilly” sound of pounding piano, jangly “sleigh bell” guitar and “bipolar” bass. His singles for Midnight Sun Records, such as “You Ain’t Nothin’ but a Sled Dog,” “Great Balls of Snow” and “Don’t Step on My Blue Suede Mukluks,” were hits from Helsinki to Anchorage. His band, Santa and the Subordinate Clauses, put on famous live shows in matching red outfits lined with white fur and amplifiers painted in red-and-white candy-cane stripes. Claus himself would enter the stage in a sled pulled by four reindeer, jump from the sled onto the piano bench and begin every show with his signature tune, “I’m the Santa Claus of Love.” Claus has come out of retirement to make this special appearance at An die Musik Live.

Though he is best known as a music critic for the Washington Post, American Songwriter, Nashville Scene, Jazz Times, No Depression, Paste and many more, Geoffrey Himes is also a longtime singer-songwriter who has co-written songs with Si Kahn, Fred Koller, Walter Egan, Sonia Rutstein, Billy Kemp, Stephen Wade, Jim Patton, Tony Denikos, Alan MacEwan, Ed Pettersen, James von Lenz, Andrew Grimm, Bob Kannenberg and others. His songs have been recorded by Kemp, the Kinsey Report, Denikos, Koller, Mojo Filter, Patton and others. For this show, he will be debuting his latest song, “On Christmas Day.”  http://www.facebook.com/RootsCafeBaltimore

Willem Elsevier is a trained violinist who has found success in both the classical and jazz worlds. He is best known, however, for his role in Love Riot, the Baltimore rock band that recorded with producer Eric Ambel and toured widely. Elsevier’s sophisticated solos helped the band beat out 2,500 other bands from around the globe to win the Yamaha Music Quest competition in Japan in 1994. Elsevier has also recorded with such acts as Billy Kemp and Milkshake. Since 2012, he has been performing and songwriter in a duo with Geoffrey Himes.