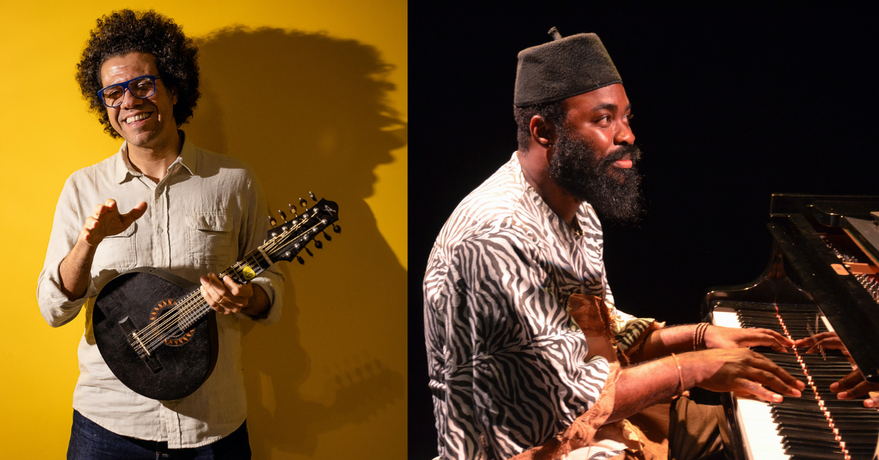 Routes of Discovery is an original project, an exploration of the musical diaspora from the slave trade to the present day created by two world-class musical icons, Hamilton de Holanda of Brazil and Nduduzo Makhathini of South Africa. Introduced to each other by Wynton Marsalis, these master musicians, thanks to the Internet's connectivity, created a musical bridge across the Atlantic as an antidote to the racial and cultural divisions that are all too common in the world today.

Each musician brings the DNA of their culture to the quest. From America`s side, we have the multi-award-winning improviser, mandolin virtuoso, and composer Hamilton de Holanda, 2022 latin grammy winner. His music, like his ancestral heritage, has roots in the culture of the black slaves who came to work in the sugar plantations of Pernambuco, the eastern Brazilian state that reaches towards Africa.  On the African side, we have the critically acclaimed pianist and composer Nduduzo Makhathini, the first South African Jazz musician signed by the prestigious Blue Note label. His Zulu roots found expression in South African churches and inspiration from John Coltrane and McCoy Tyner.

Routes of Discovery is a musical suite created from the perspective of Hamilton and Nduduzo and inspired by the sweep of history from colonization to the present day. Together they seek the headwaters of the rivers that flow from the classical compositions of Europe to the colors of the Choro, Samba, and Bossa nova, to the urban Rap and Jazz of North America, and then to the rich African music that, in turn, found turbulent upwelling in the chains of the plantations into the new world.

Nduduzo Makhathini says, “In the history and evolution of humankind probably the only element that has always been with us for as long as our memory can recall is the song, perhaps preceding all human languages and speech. As human beings evolved over the years, the song became a passageway for memory, a telling of a story, healing, and transcendence to dimensions that otherwise are unseen through our naked eye. We have been told by the wise ones that because of how our early ancestors lived, primitive languages were sung rather than spoken for identification and creation. We are the people of the song.”

Hamilton de Holanda says, "Times of difficulty are times of learning, for understanding resilience, for taking a breath and moving on. The pandemic shows us that we are equal and we have to walk in the same direction, on behalf of our planet and our community. This uncertain moment teaches us to value the individual as a unique and irreplaceable being. Now Nduduzo has become my partner. We live in different and similar countries, distant and close, and that brings us together. Our music comes from the same ancestry. The history of our people is built of suffering and overcoming. Our project will show the world the eternal hope in the search for lasting peace and collaborative, creative coexistence. Long live to the music!"

In the stress of today's pandemic, while humans have so many restrictions with regards to traveling, songs continue to carry our tales. It is the telling of these tales that we want to bring to audiences across the universe. We are sent here by the one that walked before us. We bring sounds from many parts of the world to evoke our collective memory. Come hear Routes of Discovery in a theater near you!