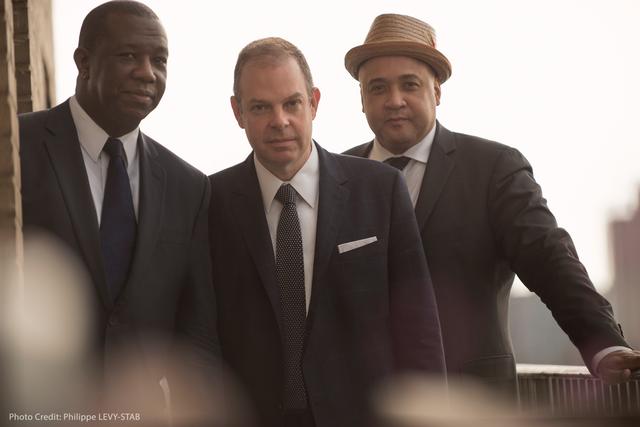 One of the world’s premier jazz pianists, Bill Charlap has performed and recorded with modern masters ranging from Phil Woods and Wynton Marsalis, to Tony Bennett and Diana Krall. Since 1997, he has led the GRAMMY® Award-Winning Bill Charlap Trio with bassist Peter Washington and drummer Kenny Washington, now recognized as one of the leading groups in jazz. This iconic modern jazz piano trio has regularly performed at premier venues such The Village Vanguard, Birdland, Dizzy’s Club, and Keystone Korner while stunning audiences worldwide with its jaw-dropping level of musical chemistry and spontaneously swinging interplay, made possible by both exceptional technical prowess and hard-earned experience.

Bill Charlap has performed with many of the leading artists of our time including Phil Woods, Tony Bennett, Gerry Mulligan, Wynton Marsalis, Freddy Cole and Houston Person. Born in New York City, Charlap began playing the piano at age three. His father was Broadway composer Moose Charlap, whose credits include Peter Pan, and his mother is singer Sandy Stewart, who toured with Benny Goodman, and was a regular on the Perry Como show. She earned a 1963 Grammy nomination for her recording of “My Coloring Book." In 2005, Charlap and Stewart released the acclaimed CD, Love Is Here To Stay (Blue Note).

In 1997, Charlap formed his trio with bassist Peter Washington and drummer Kenny Washington, now recognized as one of the leading groups in jazz. In 2000, he was signed to Blue Note Records and received two Grammy Award nominations, for Somewhere: The Songs of Leonard Bernstein and The Bill Charlap Trio: Live at the Village Vanguard. He is known for his interpretations of American popular song.. Time magazine wrote, “Bill Charlap approaches a song the way a lover approaches his beloved…no matter how imaginative or surprising his take on a song is, he invariably zeroes in on its essence.” In 2016, Tony Bennett & Bill Charlap: The Silver Lining, The Songs of Jerome Kern, was awarded a Grammy for Best Traditional Pop Album. In April, the Bill Charlap Trio released, Notes from New York, their debut recording for the Impulse label. Alan Morrison's five-star review in Down Beat stated that the new recording is "a masterclass in class.”