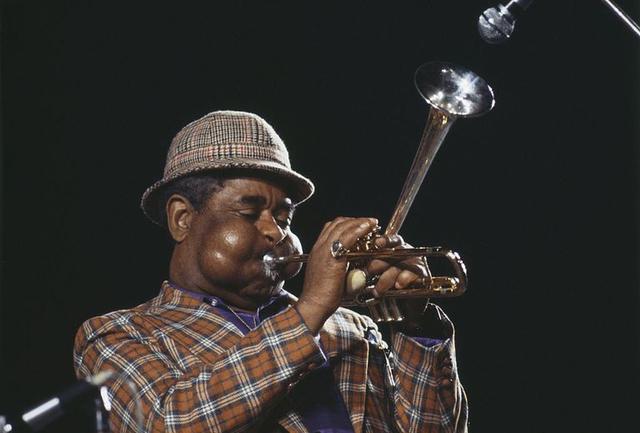 The Afro-Cuban Experience showcases Dizzy Gillespie’s love of world music, which he successfully fused with jazz during his entire career. His vast repertoire includes compositions that were inspired by his love of the African, Argentinian, Brazilian, Caribbean, Cuban, and Spanish music cultures. Dizzy’s fusion of Afro-Cuban rhythms with jazz, Cu-Bop, was groundbreaking. The well-loved melodies of “Manteca” and “Tin Tin Deo" are an important part of the jazz vernacular. Dizzy also wrote vibraphonist Cal Tjader’s Afro-Cuban hit “Soul Sauce”. Dizzy was also the first American musician to recognize the great Brazilian composer Antonio Carlos Jobim’s genius with his 1957 classic recording of Jobim’s “No More Blues” and his famous recording of “Desafinado” from Dizzy on the Rivera. His well-known discovery and collaboration with the great Argentinian pianist Lalo Schifrin (who Dizzy discovered in Buenos Aries during a tour of Argentina in 1956) produced many great compositions and arrangements. The ensemble features Dizzy’s longtime bassist and musical director John Lee, Freddie Hendrix on trumpet & flugelhorn, Japanese trombone sensation Nana Sakamoto, Brazilian pianist & vocalist Abelita Mateus Dizzy’s former drummer Tommy Campbell, and the Panamanian percussionist Renato Thoms. Their repertoire also explores the broader world of Latin-American music - the tunes Dizzy would have been playing today. They perform with energy, verve, and style, putting their own fresh stamp on a well-known genre. …the sound of the evening was complete, a dizzying array of essentials, where each moment is a passionate plea for another, and another, and another. The Dizzy Gillespie Afro-Cuban Experience clearly knows what it means to play together, and when you’re playing compositions like these, unity and spontaneity are essential. For if you’ve ever watched a river plunge through a mountain gorge, the turbulence can be overwhelming if not synced.

We offer 2 types of seating. Premium Seating is closest to the stage with the most direct views of the live performances. Bar Seating/General Admission is further from the stage, but with the same excellent sound.