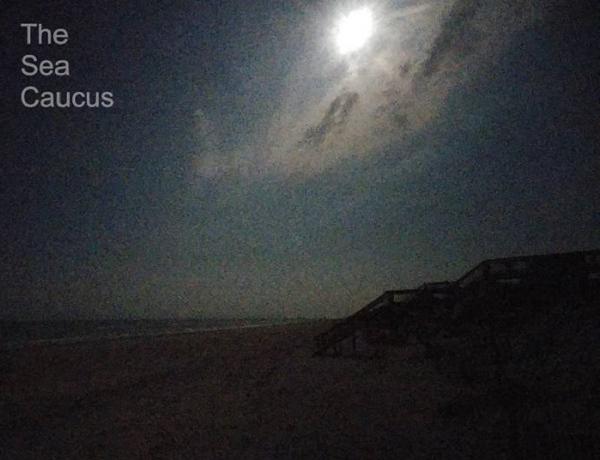 The Sea Caucus is a group that defies easy categorization. First formed in late 2019, it is an offshoot of Heumann and Homan's other instrumental music project together, Heumann Homan Highway, but with the addition of drummer/multi-instrumentalist David Bergander, who also plays with Heumann in the long-running rock band Arbouretum.
The three of them released a full-length self-titled album, which was released in April 2020 and is the unedited result of a single long form improvisation. The Sea Caucus, by The Sea Caucus

Although it is instrumental improvised music, it is perhaps a stretch to call the music of The Sea Caucus "jazz". With its harmolodic-inspired improvisational approach and lack of formally defined structure, it has aspects of what is often considered jazz, or at least free jazz, yet is also closely aligned with electro-acoustic ambient music, noise music, and psychedelic music. One thing that sets apart the music of The Sea Caucus from other improvisational ensembles is the role of Alex Homan, who uses a sampler to record, manipulate, and output Heumann's and Bergander's contributions in real-time, which is then further built upon in the collective space.

For this special performance streamed from An Die Musik's live stage, Bergander, Heumann, and Homan are very excited to have invited alto saxophonist and multi-instrumentalist Jarrett Gilgore to join in this night of music-making, allowing for further and deeper expansion of their textural, melodic, and harmonic palette.

Audience members, who in this case will have their presence felt but not seen by the performers, are encouraged to join the Sea Caucus in unique moments of sonic creation and to expect the unexpected.