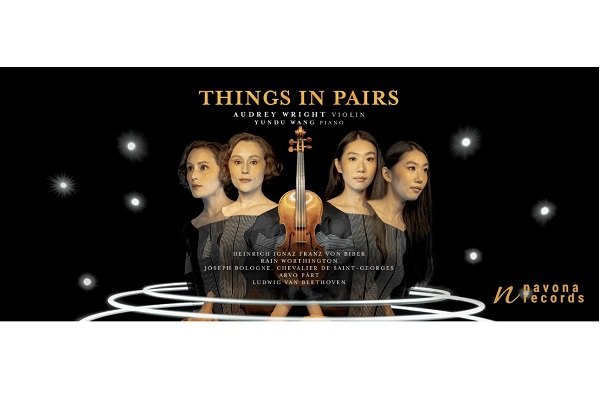 Self-taught in composition, Rain Worthington’s catalog includes works for orchestra, chamber ensembles, duos, solos and miniatures. Her writing has been described in the IAWM Journal as “a fusion of styles—ancient, medieval modality and sonorities, modernist minimalist ostinato, and classical approaches to basic ideas—to capture components of the human experience.” Her work takes “. . . ideas of American musical style to a new place – like a walk in a familiar, yet very different park” – Chamber Music.

Performances of her compositions have spanned the globe from Brazil to Iceland, Italy to India. 2020 performances of her orchestral works featured Still Motion performed at Carnegie Hall and Yet Still Night at the TUTTI Festival, Denison University. Worthington received 2020 commissions from violinist Audrey Wright and the Portland Youth Philharmonic.
https://rainworthington.com/

Violinist Audrey Wright and pianist Yundu Wang will perform works off of their brand new album THINGS IN PAIRS, including the live world premiere of Rain Worthington’s Balancing on the Edge of Shadows. To celebrate the album release, there will be a post-concert reception. Learn more about the album.

Violinist Audrey Wright is a multifaceted artist across solo and chamber music, as well as orchestral realms. She is Associate Concertmaster of the Baltimore Symphony Orchestra and Concertmaster of the Baltimore Chamber Orchestra, has performed across the globe in venues such as Carnegie Hall, Boston Symphony Hall, London’s Royal Albert Hall, Saint Petersburg Philharmonia, and the Vatican, and has soloed with the Baltimore Symphony Orchestra, Baltimore Chamber Orchestra, New World Symphony, and Cape Symphony Orchestra. With a passion for innovative programming and juxtaposing a wide range of musical styles, her repertoire spans the early 17th century to modern day and her performing experience includes the full spectrum of these musical styles, from period performance practice to the premiering of new and personally-commissioned works.

Wright holds degrees from the New England Conservatory of Music and the University of Maryland. Her primary teachers include David Salness, Lucy Chapman, Bayla Keyes, and Magdalena Richter. She plays on a 1763 J.B. Guadagnini violin generously on loan from conductor Marin Alsop. https://audreywrightviolin.com/

Wang graduated with Honors from New England Conservatory of Music in Boston and received a master’s with distinction at Guildhall School of Music & Drama. She was recently awarded a Doctorate of Music from the Guildhall School, supervised by Ronan O’Hora, Cormac Newark, and Elinor Payne (University of Oxford). Her doctoral research explores, through interdisciplinary and multi-methodological study, the relationship between speech and musical performance. Her work also involves autoethnographic examinations of musical expression, East Asian identity, and the performer’s voice in Western classical music. https://yunduwang.com/