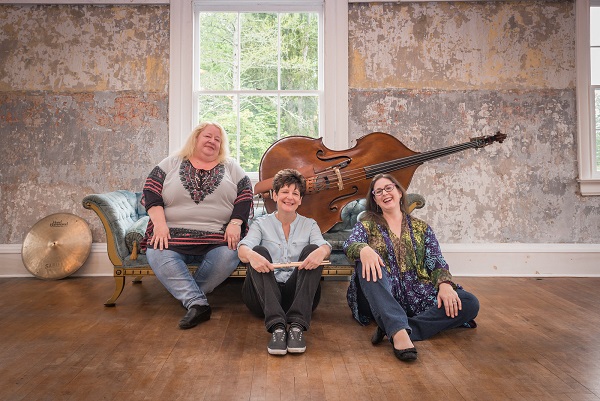 “Jackie Warren is a powerfully grooving pianist; Meanwhile Amy Shook  and Sherrie Maricle set up a beat so strong it could drive a fleet of eighteen-wheelers."  - Jerome Wilson, All About Jazz

Fiercely swinging on purpose, with purpose this powerhouse trio plays original,  traditional and contemporary standards from all genres of music. Their unique style and innovative arrangements are always super-charged by their boundless musical joy and gratitude.

Sherrie, Amy, and Jackie met in May of 2014 at the Cleveland Playhouse while playing in The DIVA Jazz Orchestra as part of Maurice Hines’ award-winning show Tappin’  Thru Life. From their first shared downbeat, they became kindred-swinging spirits and  the resulting musical synergy was fast and fierce...or as the New York Times  said…"Blistering Hot!" The show received the 2016 Audelco Awards’ Musical  Production of the Year.

Both of 3D’s 2020 recordings, I Love To See You Smile (released in April 2020) and  Christmas in 3D (released October 2020) were recorded at Red Rock Recording Studio in Saylorsburg, PA. Both albums received widespread critical acclaim, with I Love To  See You Smile landing a four-star review in Downbeat Magazine and inclusion on  Downbeat’s year-end “Best of 2020 albums,” and a ranking of #10 overall on RMR’s  “Top Jazz Album Chart 2020,” as well as in the top 50 of “Top Albums of 2020” on the  NACC year-end chart. Christmas in 3D was featured first in line in the New York Times  “20 Albums That Put a New Spin on the Holidays,” and Ranked #4 overall with  Christmas in 3D on RMR’s Top Holiday Album Chart for the Year of 2020, peaking at  #1. All of their recordings can be purchased directly through their website  (3djazztrio.com), Amazon, downloaded from Bandcamp and iTunes and streamed on your favorite service.