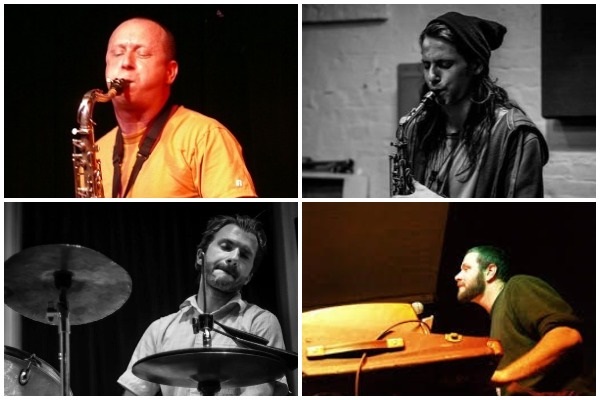 This is a recording of their live performance on March 19, 2021.

Jarrett Gilgore is a multi-instrumentalist, improviser, composer, and teacher currently residing in Baltimore. He often performs on saxophone. He plays shows actively in the U.S.A. and internationally in a wide variety of contexts.

He has performed/recorded with many notable musicians in the jazz and experimental music world, including Jaimie Branch, Tony Malaby, Susan Alcorn, Laraaji, Lonnie Holley, Michael Formanek, and bands such as Anna & Elizabeth, Dan Deacon Ensemble, and the Cass McCombs Band.

"Multi-reedman John Dierker has become a major improvisational stylist . . . interweaving concepts augmented by howling lines, injections of blues-drenched choruses and Albert Ayler-like display of energy." (All About Jazz.)  A Baltimore native Dierker has worked in a wide variety of musical settings collaborating with Michael Formanek, Gerald Cleaver, Susan Alcorn, Jason Willett, Jad Fair, The Basement Boys, and Marty Ehrlich, to name a few.  He is a longtime member of Lafayette Gilchrist and The New Volcanoes. Currently, he is working with Quartet Offensive, Lubbock, and Microkingdom as well as freelancing in the Baltimore/D.C. area.

Mike Kuhl, drummer, recording artist, educator, Michael Kuhl hails from the musically diverse city of Baltimore. Kuhl studied and performed in numerous genres, making him a first call drummer for any situation. A graduate of Towson University, Kuhl has performed locally and throughout the globe alongside jazz greats Dave Liebman, Tony Malaby, Michael Formanek, Dave Ballou, Ellery Eskelin and Claudio Roditi. Outside of jazz, Kuhl has shared the stage with many international acts such as Beach House, Arboretum, Cigarettes After Sex, Tom Tom Club, and The Ravonnettes.