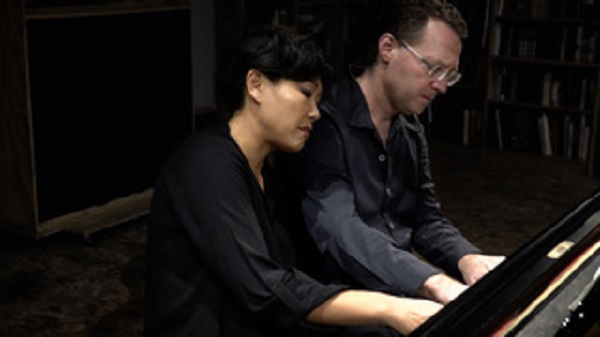 Pianists Stephanie Ho and Saar Ahuvia collaborate as DUO Stephanie & Saar in dazzling performances filled with visceral excitement, elegance and artistic vision. “ Stephanie and Saar’s last night’s performance once again recalled all the epithets of elegant and innovative, that have been following them throughout their career.” ~ Radio Sarajevo

Recent career highlights include multiple performances of Igor Stravinsky’s Rite of Spring at New York City’s Lincoln Center and other venues in Tel Aviv, Sacramento, Portland and Providence, among others. Miami’s Dranoff Two Piano Foundation featured Stephanie and Saar in a jazz-inspired program at the South Miami-Dade Cultural Arts Center and Piano Slam with DJ Cardi at the Adrienne Arsht Center. They are regulars and audience favorites at New York City’s hip (le) poisson rouge, selling out every show they present at the club.

The duo are founders and artistic directors of Makrokosmos Project, a critically acclaimed Oregon-based new music festival featuring dynamic American composers of our time. In its sixth year, the festival is entirely driven by community support. Some of the featured composers include Kenji Bunch, Gabriela Lena Frank, Caroline Shaw, Julia Wolfe, John Luther Adams, Karen Tanaka, Michael Johanson and Alexander Schwarzkopf, among many others.

As probing recording artists, the duo explores repertoire with concomitant classical and contemporary sensibilities. Bach Crossings, their debut album on New Focus Recordings, features whimsically soulful four hand transcriptions of Johann Sebastian Bach by György Kurtág. God’s Time is the Very Best of Times, a favorite with audiences both in person and online, was featured on the holocaust documentary feature film Red Trees. Beethoven Dialogues, their first album showcasing Beethoven Quartets in four hand transcriptions, was chosen as Album of the Week by NYC’s WQXR 105.9FM.

Stephanie and Saar are the first piano duo to perform and record the complete Art of Fugue in four hands and two piano settings. “Their vision of an Art of Fugue that is a work of performance art, not an academic piece to be listened to reverently... This is creative music-making of an extraordinarily high level.” ~ Art Music Lounge

Married to one another since 2005, Stephanie and Saar met by reading through Beethoven Quartet transcriptions, a project encouraged by Leon Fleisher. Outdoor enthusiasts, they can be found hiking backcountry trails along the peaks of the Pacific Northwest, or climbing granite boulders on the Appalachian Trail in the Northeast. Please visit them at www.stephsaarduo.com.