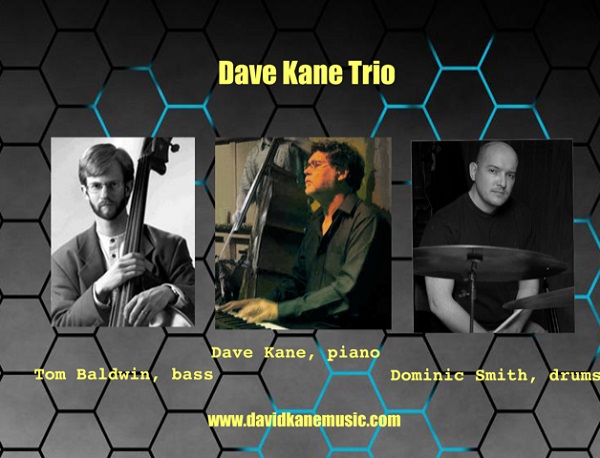 "Here is ample evidence of a musician and composer who is thinking about where he wants to take his music, rather than simply relying on laying truckloads of technique on listeners as the sole means for winning our attention.”—AllAboutJazz.com

A program of compelling originals and creatively reimagined jazz classics

David Kane was born in 1955 in Glasgow, Scotland. He has been active in the US since 1975 as a pianist, composer, author and educator. He has performed and recorded with artists such as Woody Shaw, Mark Murphy, The Duke Ellington Orchestra, Dave Liebman, Rumba Club, Don Cherry and Dizzy Gillespie and is currently the pianist for the Stan Kenton Legacy Orchestra. He is the author of the “Playing Outside the Chord,” a best-selling primer on "outside playing" endorsed by Dave Liebman and Richie Beirach. He has also performed extensively with the National Symphony Orchestra, the Baltimore Symphony, the Twentieth Century Consort et al. His recordings include six CDs of original music under his own name. He has composed both classical music and film music with hundreds of film and TV scores to his credit. He teaches the Jazz Masters program at the University of Arkansas. www.davidkanemusic.com

Tom Baldwin is a jazz bassist, educator, composer, and arranger in the Washington, D.C. area. He has been one of the most in-demand bassists in the region for 30 years. Baldwin has taught at the University of Maryland since 1996, and appears on over 50 CDs as a side man.Tom earned a BM in Jazz Studies at Ithaca College where he studied with Steve Brown, Henry Neubert, and Rick Beato. Soon after returning to Baltimore, Tom won 2nd place in the prestigious Thelonious Monk International Bass Competition. He has performed and recorded with scores of top Jazz artists. A partial list includes  Gene Bertoncini, Marc Copland, Stanley Cowell, George Garzone, Tootie Heath, Fred Hersch, Tim Hagans, Lee Konitz, Harold Mabern, James Moody, Walt Weiskopf, and James Williams. His more notable recordings include the self-produced Glom On To This  of all original compositions and arrangements. Steve Herberman’s Ideals from 2009, Tony Martucci’s Life In Hand features pianist Marc Copland, three of Tom’s compositions, and was voted by the Washington Post among the best of 2011.

Drummer Dominic Smith has been a fixture on the jazz scene for more than 30 years, playing with the cream of the crop of local players and visiting musicians from New York and elsewhere. Dominic has appeared as a sideman on more than 50 recordings. His hard-swinging groove, use of dynamics and rhythmic subtleties have been utilized by such jazz notables as Eric Alexander, Harold Mabern, James Williams, Charlie Byrd, Phil Woods, Gary Thomas, Jim Snidero, Kenny Rankin, Dennis Irwin, Ray Bryant, Keter Betts, Charles McPherson and George Garzone.