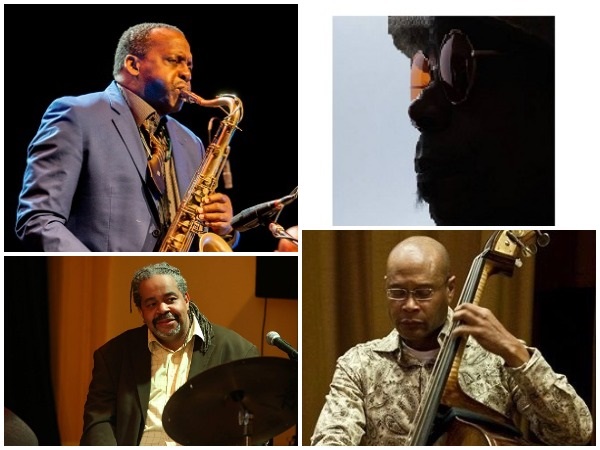 David Murray, an Oakland native, now living in NYC and Europe, has enchanted audiences around the world with his rocket-fueled streak of sonic creativity. His music defies genre boundaries, weaving a unique tapestry of sound. A co-founder of the historic World Saxophone Quartet with Hamiet Bluiett, Oliver Lake and Julius Hemphill, he has played with the greats. His awards include a Grammy and several nominations; a Guggenheim Fellowship; the Bird Award; the Danish Jazzpar Prize; Village Voice musician of the decade; Newsday musician of the year; personality of the Guinness Jazz festival, and the Ralph J. Simon Rex Award. Two documentaries have been made about David Murray’s life: “Speaking in Tongues” and “Jazzman”, nominated at the Baltimore Film Festival.

Lafayette Gilchrist’s music draws on the span of jazz history from stride to free improvisation, along with inspiration from hip-hop, funk, and Washington D.C.’s unique go-go sound. His work thrives on making surprising connections between styles and influences, boldly veering from piledriver funk to piquant stride, vigorous swing to hip-hop swagger, contemplative abstraction to deep-bottom grooves. Gilchrist has toured extensively with David Murray, and his compositions have graced the soundtracks of David Simon’s acclaimed series The Wire, The Deuce, and Treme. In 2017, Gilchrist was named a Local Legend by Baltimore Magazine, and Baltimore City Paper named Lafayette Gilchrist and the New Volcanoes “Best Band.” In 2018 he was a Baker Artist Award winner. In  2020 he released the  double album Now with the Lafayette Gilchrist Trio featuring Herman Burney on bass and Eric Kennedy on drums.

Herman Burney is a native of Washington, DC, but was raised in the arts-nurturing state of North Carolina where he grew up listening to Mahalia Jackson, Aretha Franklin, and James Cleveland. During his early years Herman played clarinet, drums and tuba and later took up electric bass for a “hard-core funk group” in high school.  After meeting jazz titan George Duvivier in 1987, Herman finally settled on his beloved double bass. He has traveled the world to establish an impressive list of performance credentials as bassist for Nneena Freelon, Marcus Roberts, Freddy Cole, Natalie Cole, Wynton Marsalis, Frank Wess and many others of equal renown. After returning from tours in Japan and Russia, Herman mixed his first and second CDs: “First Fruits” and “Offering”,  which was released in 2011and contains mostly original tunes. Herman teaches at George Washington University and the Sitar Arts Center in D.C.

Eric Kennedy, a Baltimore native, is a drummer, vocalist, percussionist, educator and composer. He taught in the Baltimore City Public School system and was faculty in the Peabody Conservatory of Music Jazz Department from 1998-2001. Eric has received numerous awards and grants for performance and composition. He was runner up in the 2004 Billie Holiday Vocal Competition and first place band member in the 2008 and 2009 Chick Webb Jazz Combo Competitions.