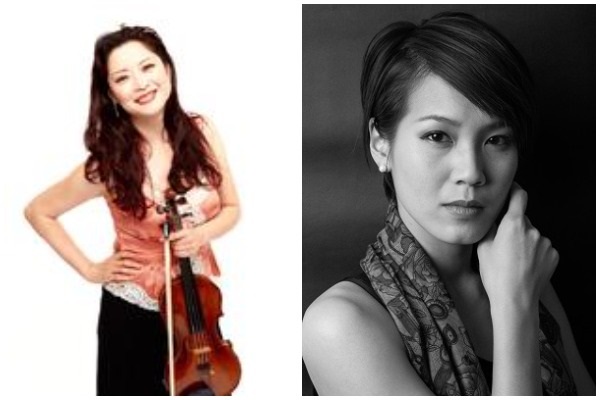 Beethoven: Violin and Piano Sonata No.6 in A major, Op.30 no. 1
Allegro
Adagio
Allegretto con variazioni

Astonishing in her musical versatility, violinist Qing Li brings great warmth, poise and insight to her music-making. Born in Beijing China, Ms. Li began violin studies at age 4 with her father Zhen-Kun Li. At age 12, Qing Li was accepted to the Central Conservatory of Music in Beijing. There Ms. Li has also studied with Herbert Greenberg, the former concertmaster of the Baltimore Symphony Orchestra for 20 years. After graduating from Peabody she studied with the legendary Joseph Gingold and won fellowships at major music festivals including Aspen, Tanglewood, Meadowmount and Alexander Schneider's New York String Seminar. Ms. Li had won her first position in the Baltimore Symphony Orchestra, playing a $100 Chinese violin that her father had given her. She currently performs on a Neopolitain instrument made by Nicolo Gagliano in 1736.

Qing Li is currently the BSO’s Principal Second Violin, appointed by Yuri Temirkanov in 2000 upon winning the audition, and is frequently featured as a soloist. Ms. Li is a Piatigorsky Foundation Artist, a much sought-after recitalist, chamber musician and guest Concertmaster. Ms. Li is a faculty member of the Peabody Conservatory of Music.

Pianist Wan-Chi Su has performed in Asia, Europe, and the United States as a soloist and collaborative artist, at major venues including Carnegie’s Weill Recital Hall, Salle Cortot in Paris, and Taiwan National Concert Hall. Reviewing her recent performance at the Washington National Cathedral, the American Scholar noted that “(she) played with sensitivity and imagination.”

Decorated with numerous awards, Ms. Su won first prize in the Taiwan Cultural Cup Invitational Piano Competition and the Taiwan National Student Music Competition in Piano. Further, she has been invited to numerous music festivals, including the Taos School of Music, the Beethoven Institute, both the Icicle Creek Piano Festival and the Icicle Creek Chamber Music Festival, the NTSO International Piano Program in Taiwan, and the Paris Piano Program in France. Ms. Su currently serves on the piano faculty of the Park School of Baltimore and maintains a small private studio. Born in Kaohsiung, Taiwan, Ms. Su began piano lessons at age four. She earned a bachelor’s degree in piano, minoring in French horn, at the National Kaohsiung Normal University in Taiwan, followed by a Master of Music and a Graduate Performance Diploma at the Peabody Conservatory, studying with Seth Knopp, and is currently a doctoral candidate at Peabody, under the tutelage of Benjamin Pasternack.