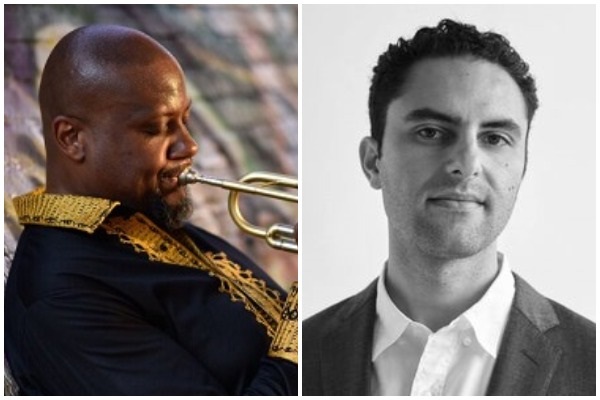 Music and spirituality have always been fully intertwined in the artistic vision of trumpeter, bandleader, composer, educator and activist Sean Jones. Singing and performing as a child with the church choir in his hometown of Warren, Ohio, Sean switched from the drums to the trumpet at the age of 10.

Sean is a musical chameleon and is comfortable in any musical setting no matter what the role or the genre. He is equally adept in being a member of an ensemble as he is at being a bandleader. Sean turned a 6-month stint with the Jazz at Lincoln Center Orchestra into an offer from Wynton Marsalis for a permanent position as lead trumpeter, a post he held from 2004 until 2010. In 2015 Jones was tapped to become a member of the SFJAZZ Collective where he was a member until 2018. During this time, Sean has managed to keep a core group of talented musicians together under his leadership forming the foundation for his groups that have produced and released eight recordings on the Mack Avenue Records, the latest is his 2017 release Sean Jones: Live from the Jazz Bistro.

Sean has been prominently featured with a number of artists, recording and/or performing with many major figures in jazz, including Illinois Jacquet, Jimmy Heath, Frank Foster, Nancy Wilson, Dianne Reeves, Gerald Wilson and Marcus Miller. Sean was selected by Miller, Herbie Hancock and Wayne Shorter for their Tribute to Miles tour in 2011.

Sean is also an internationally recognized educator. He was recently named the Richard and Elizabeth Case Chair of Jazz at John Hopkins University’s Peabody Institute in Baltimore. Before coming to Peabody, Sean served as the Chair of the Brass Department at the Berklee College of Music in Boston.

Grammy-nominated pianist and composer Alex Brown is quickly emerging at the forefront of a new generation of artists. The New York Times says he plays “with a crystalline touch and a worldly approach.”  Brown frequently performs with his own group, and Downbeat Magazine described his 2010 album Pianist as “a really fine record that leaves you wanting more.”  Brown has been a member of Paquito D’Rivera’s ensemble since 2007, performing on and contributing arrangements to their Latin Grammy award-winning album Jazz Meets the Classics.  Brown collaborates frequently with vibraphonist Warren Wolf, steel pan virtuoso Victor Provost and the classical wind quintet Imani Winds.  In 2016, he performed Gershwin’s Rhapsody in Blue as a soloist with the Orquesta Symphonica de Mineria led by conductor Carlos Miguel Prieto in Mexico City.  Brown has performed in many of the world’s greatest venues including Jazz at Lincoln Center in New York City, the Kennedy Center in Washington, DC, and the Palacio de Bellas Artes in Mexico City.  As an arranger and orchestrator, he has had music performed by premier groups that include the Philadelphia Orchestra.  Brown earned his Bachelor of Music degree at New England Conservatory and his Master of Music degree in composition at the University of Miami’s Frost School of Music.  In 2018, Brown joined the faculty of the Peabody Institute, part of Johns Hopkins University in Baltimore, as a Visiting Artist in Jazz Studies.  Brown is a YAMAHA artist and resides in New York City.  http://www.alexbrownmusic.com/