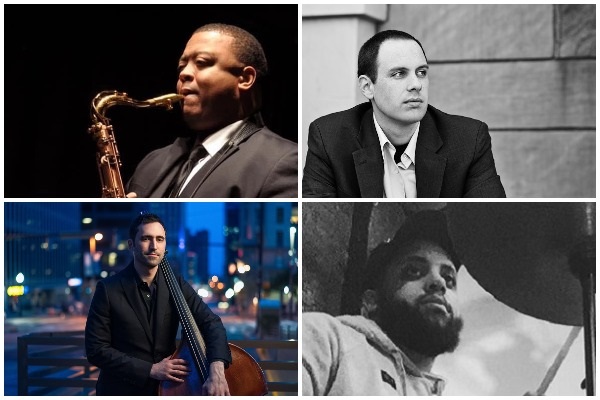 Craig Alston is a Baltimore born and based multi-instrumentalist and composer specializing in woodwind, brasswind, keyboard and bass guitar in genres such as jazz, rhythm and blues, soul, hip hop and gospel. He is best known for his complex yet soulful sound on the saxophone. Craig has performed with notable musicians such as Lee Ritenour, Earl Klugh, Jonathan Butler, Najee, Norman Brown, Brian Culbertson, Frank McComb, Dennis Chambers, Eric Robeson and Larry Willis; legendary groups such as The O'Jays, The Temptations, and The Four Tops; as well as Soulful Symphony and the Cab Calloway Orchestra. He was the saxophonist for Fertile Ground and led the Eubie Blake Legacy Band for over seven years. Craig received the 2013 Jazz Journalists Jazz Heroes Award and was the winner of the 2011 Chick Webb Jazz Combo Competition. He is currently a Musical Director for multiple independent artists, a clinician, and the woodwind teacher for OrchKids.

Dover, Delaware native Todd Simon is a 2007 Peabody graduate and a mainstay of the area jazz scene as a pianist, organist, and saxophonist. He served in the U.S. Naval Academy Band from 2009-2014 as a multi-instrumentalist in several ensembles. In 2019, Todd moved to NYC and immediately began performing at several venues in Harlem, Manhattan, and Brooklyn. He performed and/or recorded with Chris Potter, Nicholas Payton, Gary Bartz, Tim Warfield, Antonio Hart, Ralph Peterson, Gary Thomas, Paul Bollenback, Taurus Mateen, Mike Pope, Dontae Winslow, Mark Gross, Freddie Hendrix, Warren Wolf, Daryl Davis, and Vanessa Collier, as well as several acclaimed ensembles including The Fabulous Hubcaps, which his father founded. Todd has two albums as a leader: Simon Says led to an ASCAP Herb Alpert Young Jazz Composer Award and the first of 2 top-tier MSAC Individual Artist Awards. The 3-volume Simon Brothers Holiday Special with bassist (and brother) Shawn Simon. Todd frequently plays for All Souls Unitarian Church in D.C. and the non-profit Voices of Vets, whose goal is to bring music to every veteran home in the country.

Described as a musician with “wit, soul and an organic-sounding complexity that only a master can pull off” (Giovanni Russonello; CapitalBop, New York Times), Blake Meister has performed around the world with a range of virtuoso musicians. Touring and recording with Larry Willis, in his Heavy Blue band, Blake developed in the modern jazz tradition. He appears on Willis’ final outing, I Fall in Love Too Easily, on HighNote records. Blake honed his style and musical dialect working regularly with Gary Thomas, including Thomas’s large ensemble, Pariah’s Pariahs. He appears on Thomas’s album At Risk, on Inner Circle Music, for which he also wrote the liner notes. Blake's debut as a leader, Septagon received critical acclaim. CapitalBop and Washington City Paper named it Album of the Year. He is a regular member of the Baltimore Jazz Collective, with trumpeter Sean Jones. He is a bassist for the American Studio Orchestra (a multi-media ensemble) and has been a member of several traditional orchestras. Meister served on the Peabody Conservatory faculty for a decade, and as faculty and program director for the Peabody Preparatory, where he founded a robust, productive jazz department.