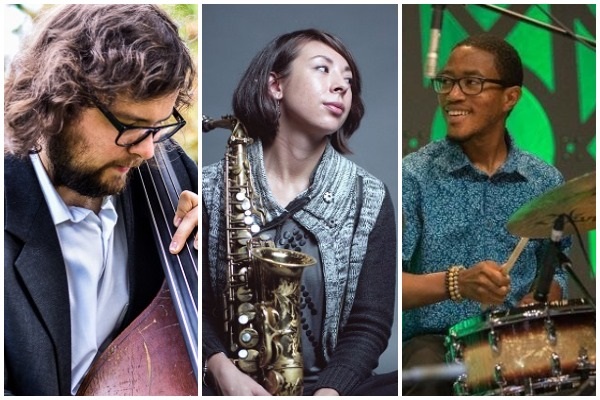 Over years of playing in various configurations and settings, saxophonist Sarah Hughes, drummer Kelton Norris, and bassist Stephen Arnold have developed a natural and intimate style of group improvisation that is inspired by Ornette Coleman and Wayne Shorter’s quartet but always has both feet firmly planted in the present. Nothing is scripted, and anything resembling composition occurs naturally and spontaneously. The trio’s first recording is due to be released in 2021.

Sarah Hughes is an alto saxophonist, composer, and music educator from Pasadena, Md. She is a free improviser who enjoys creating within and on top of many genre frameworks including jazz, swing, blues, folk-pop, and rock. On the collegiate level, Sarah studied first with the classical saxophonist Dale Underwood at the University of Maryland. She received a bachelor’s degree in instrumental music education in 2008 and taught beginning band and strings programs for Prince George’s County for five years. In 2013 Sarah left the DMV to pursue a master’s degree in jazz saxophone performance from the England Conservatory in Boston, studying with Jerry Bergonzi, Ran Blake, Anthony Coleman, and Donny McCaslin. She recorded with Anthony Coleman on his album "You", and performed with him at The Stone and Roulette in New York. She received her degree in 2015 and returned to the DMV in 2016. Since graduating, Sarah toured Sweden as part of their first annual Women in Jazz Festival and shared the bill, opening for great free improvisers such as Joe Morris, Nicole Mitchell, Fay Victor, William Parker, Hamid Drake, and Ken Vandermark.

With the roots of his performance career in a church in the rural town of Raleigh, Mississippi, and an educational background that includes a Music Education Degree and Master’s in Jazz Performance, Kelton Norris is, without doubt, a force to be reckoned with in Jazz performance and education. Titled Best Drummer by Washington City Paper in 2016 -- an article that noted Norris’ "sharp ears and joyful rhythmic precision" -- Norris draws from his experiences as a performer in New Orleans and Chicago, and influences from other noted musicians such as Chad Anderson, Ronald Carter, Fareed Haque, Thad Wilson, Victor Provost, and Tarus Mateen. Norris has appeared on stages of well-noted venues such as Chicago’s Jazz Showcase and Andy’s Jazz Club, Dizzy’s Club Coca-Cola, Indianapolis' Jazz Kitchen, Kennedy Center’s Millennium Stage, Bohemian Caverns, Blues Alley, and many others. Currently, Kelton lives in the DC Metropolitan area, where he performs regularly at various music venues. He teaches in his private studio as a private lessons teacher at Sidwell Friends School, Holy Trinity Episcopal School, and School of Rock.

Stephen Arnold is a bassist, composer, producer, and arranger living in Washington, DC. Known for his open ears, earnest expression, and unique musical voice, he has quickly become one of the region’s most in-demand upright and electric bassists. Hailing from Greenfield, MA, Stephen’s earliest connection to jazz comes from listening to NEPR’s Jazz à la Mode radio program, which his father would put on every night before bed. Stephen studied jazz at George Washington University, where he studied with Herman Burney Jr. for his first formal lessons on the upright bass and continues to be an important teacher, role model, and mentor. In 2018 he was selected for Betty Carter’s Jazz Ahead program at the Kennedy Center. Stephen is a member of and featured on studio recordings by not-jazz band ¡FIASCO! and adventure-music ensemble The New World. His debut album of original compositions Sea Change was released in October of 2020 and was named the #4 D.C. jazz album of the year by Capitalbop.