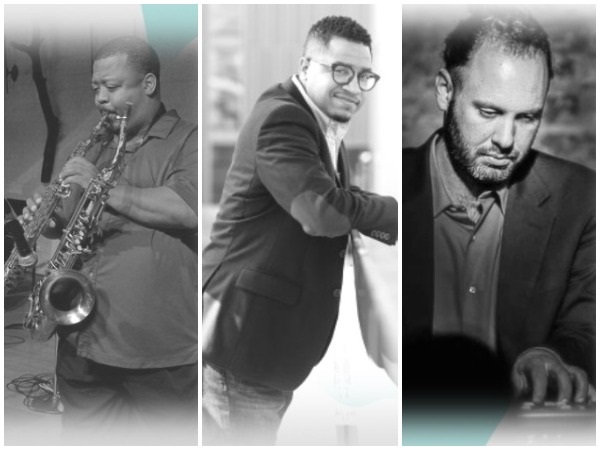 Philip Thomas was born in Wilmington Delaware and raised in Cleveland Ohio. After moving to Baltimore, Philip was afforded the opportunity while attending UMES to play with such notable musicians as Wynton Marsalis, Wycliffe Gordon, Bilal, and many others. After leaving college Philip took a 4-year break from music, being encouraged by close friends in 2015 Philip jumped back out into the music scene playing music heavily between Baltimore and D.C. Philip Thomas's goal when he performs is to help heal and encourage the Listener.

Craig Alston is a multi-instrumentalist from Baltimore who is best known as the saxophonist for Fertile Ground, whose sound was influenced by Sade, Fela Kuti, Miles Davis Quintet and Art Blakey and the Jazz Messengers. As an independent artist, Craig plays the saxophone, bass, or keyboard. As a saxophonist, Craig has played with jazz legends such as Larry Willis, David Murray, Oliver Lake, John Hicks, and Jimmy Heath. He recently won the Chick-Webb Jazz Combo competition. He has been leading the Eubie Blake Legacy Band for the past seven years, and Genese Music and Entertainment selected him to be their Senior Consultant for its Obia Soul label. Craig is the music director and instrumental music teacher for the Maryland Summer Center, which teaches gifted and talented students to understand and play jazz, and HR leads the Timothy Baptist Summer Music Program where students with little to no instrumental experience begin learning to play instruments.

Dover, Delaware native Todd Simon is a 2007 Peabody graduate who has since become a mainstay on the Baltimore/Washington D.C. jazz scene as a pianist, organist, and saxophonist. In 2009 he was hired as the pianist for the U. S. Naval Academy Band, serving until 2014 as a multi-instrumentalist in several ensembles. In 2019, Todd moved to New York City and began immediately performing at several venues in Harlem, Manhattan, and Brooklyn.Todd’s career as a full-time freelance musician has led to opportunities to perform and/or record with many jazz greats, including The Fabulous Hubcaps, a group his father Dale “Rocky” Simon founded.

Todd is featured as a sideman on 11 recordings to date and has 2 albums as a leader: Simon Says (which led to an ASCAP Herb Alpert Young Jazz Composer Award and the first of 2 top-tier MSAC Individual Artist Awards and the 3-volume Simon Brothers Holiday Special with bassist (and brother) Shawn Simon. Todd remains an active composer, arranger, multi-instrumentalist, and vocalist covering many genres. Career highlights include playing at 55 Bar NYC, Vietnam’s Sax n Art Jazz Club, The Mid-Atlantic Jazz Festival, Blues Alley, the Kennedy Center’s Millennium Stage, An die Musik, Caton Castle, The Hamilton Live, the Eighteenth Street Lounge, and Keystone Korner Baltimore. Todd also frequently plays for All Souls Unitarian Church in D.C. and the non-profit Voices of Vets, whose goal is to bring music to every veteran home in the country.